The Federal Reserve last raised interest rates by 25 basis points on 16 December 2015. That was the first rate hike in nearly a decade. During that historic meeting, the Fed framed market expectations with their forecast of four rate hikes for 2016. Hence, the market expected a 25 basis point hike every quarter starting March 2016.

On 16 March 2016, the Federal Open Market Committee (FOMC) announced that they had decided to hold interest rates at the range of 0.25-0.50% instead of raising rates further. In addition, they changed their forecast from four to two rate hikes this year. 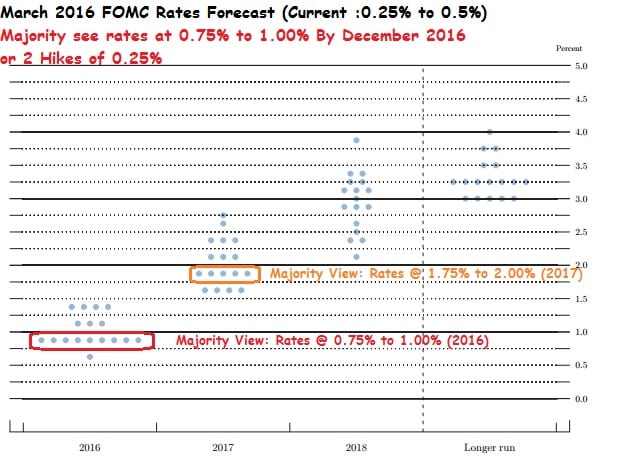 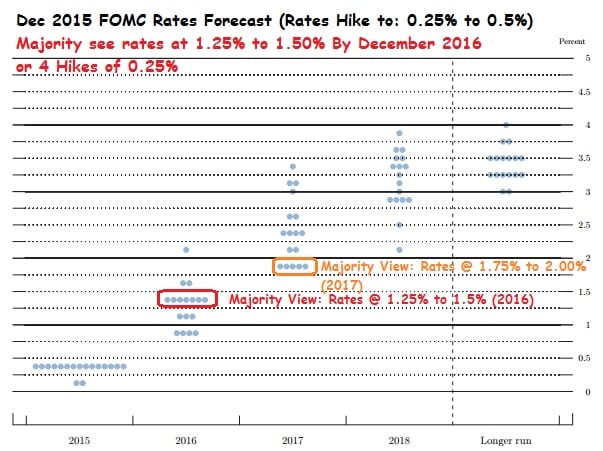 This can be seen clearly in the Fed’s dot plot projection above. So what caused the Fed to reduce its forecast so drastically this year?

As the central bank of the United States, the Fed has the mandate to keep inflation low at 2% and improve the labour market through monetary policies. They have to keep the economy strong in order to do so. In its most recent statement in March 2016, the Fed described the economy as:

“…expanding at a moderate pace despite the global economic and financial developments of recent months”.

In other words, the Fed is satisfied with the overall growth of the US economy but external developments forced them to reduce the number of rate hikes this year. (The fact that they didn’t change their interest rate outlook for 2017 implies that they are still confident of the overall economic growth in the longer run and the two rate hikes they plan to forgo this year is likely to be introduced next year.)

One of the current weak spots of the US economy is its weak net export. This means that its foreign buyers are not spending as much as they should be due to their own economic weakness. My previous article cited the historic move by the Bank of Japan to introduce negative interest rates. This was done to spur spending and investment as Japan is only one quarter of contraction away from a recession.

We also have to consider the drag of the Chinese stock market crash at the start of the year; that was their third major decline in seven months. China has since changed its chief securities regulator but it remains to be seen if we will see another major Chinese shock this year.

Europe is enduring the financial and social burden of hosting 1.1 million refugees mainly from Syria. Europeans are split between those lobbying for human rights and those who want to kick them out to Turkey. Internally, European countries are arguing on how to share the burden as the bill for saving the refugees mount. Germany alone has to pay $50 billion euros for these refugees.

If that is not enough, we have the threat of Brexit. Despite the economic uncertainty, there are influential figures such as London mayor Boris Johnson and members of the cabinet who are in favour of leaving the European Union. 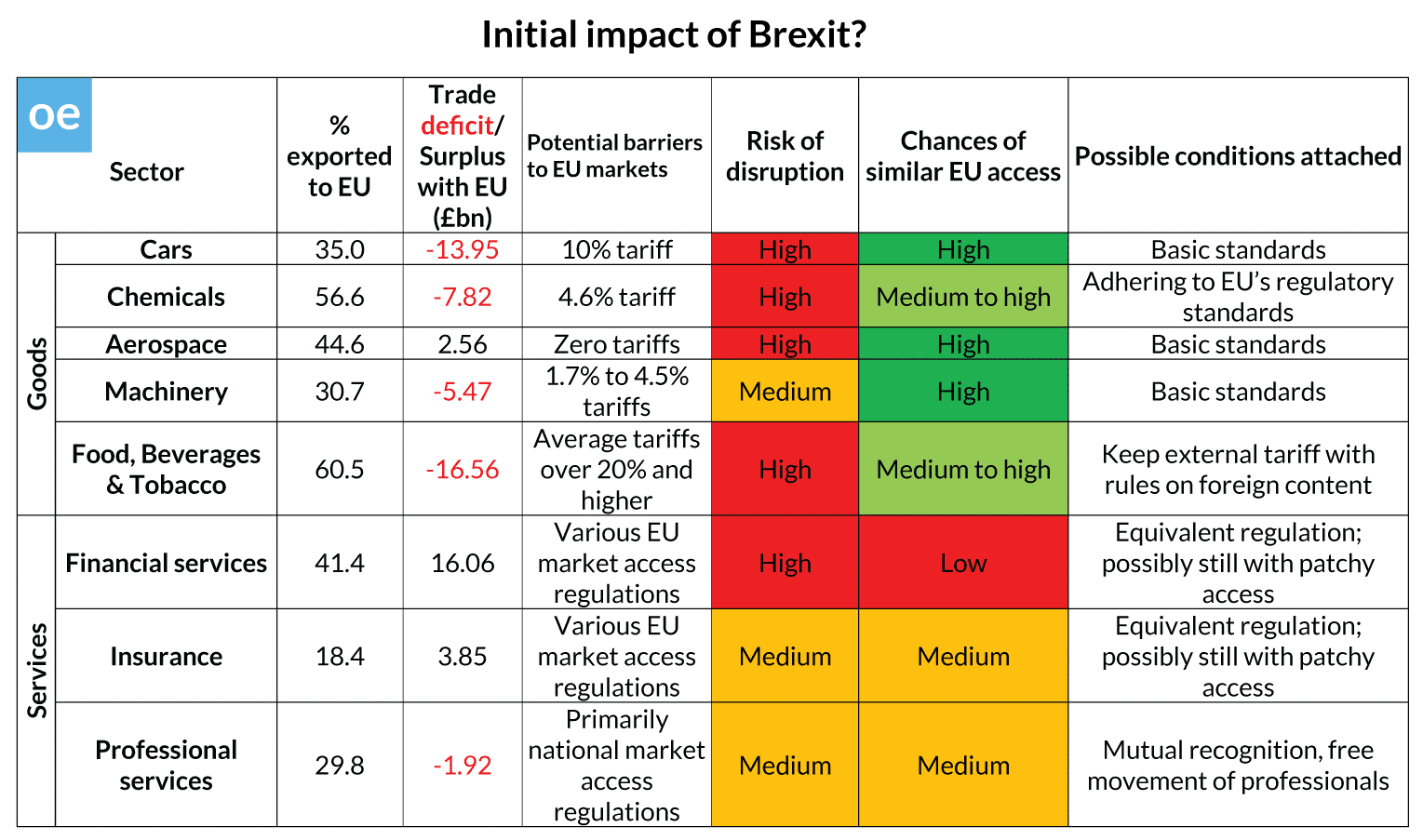 Currently it is a tight vote. UK Prime Minister David Cameron is trying to shift public opinion to remain in the EU before the crucial referendum on 23 June 2016. If the UK were to leave the EU, it would galvanize Scotland to leave the UK next (again) and the implications could be far reaching.

The International Monetary Fund (IMF) reduced its forecast of global growth from 3.6% to 3.4% in 2016. Investment bank Morgan Stanley defines global recession as GDP growth below 2.5% and in its most recent forecast on 14 March 2016 (nicely timed at the start of the two-day March FOMC meeting), their analysts cut global growth forecast from 3.3% to 3.0% for 2016. They also increased their probability of global recession from 20% to 30% this year.

The Fed is like the captain of the US economic ship and they are understandably worried about the gathering clouds. It was enough for them to reduce their rate hikes forecast to two this year. This is despite the growing strength of the US economy. Singapore is currently being dragged down by these external factors. Business confidence has fallen to an all-time low and GDP growth forecast is cut to 1.9% for 2016.

What Will the Fed do Next?

Now that you understand the reasons behind the Fed’s decision to hold rates and reduce its forecast hikes this year, would you be interested in what the market thinks about the Fed’s rate hike forecast? After all, the Fed’s interest rates influence the SIBOR which affects your monthly mortgage payments.

The collective market wisdom can be seen in the CME Group Fed Fund futures prices. Different institutional parties need to hedge against changes in interest rates with futures. Based on these futures prices, the CME calculates the implied probability of interest rates at different points in time. 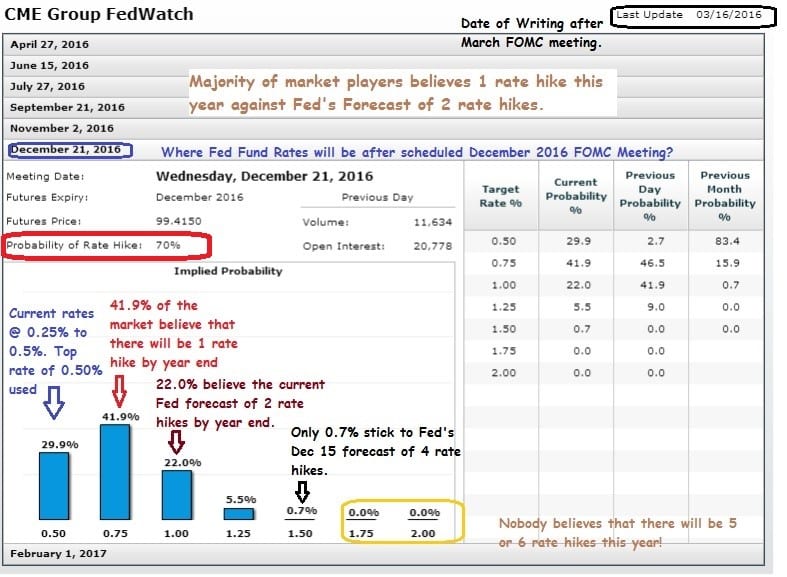 As real money is involved, this has some credibility. Right after the FOMC statements, the majority of the market (41.9%) believed that there will only be one rate hike this year. This is followed next by 29.9% who foresee no hikes this year and 22.0% who had faith in the Fed’s forecast of two rate hikes this year. Overall, the market sees approximately 70% probability of at least one rate hike this year. Of course, this by no means a certainty — but if you’re looking for some future guidance on interest rates, this can be very useful.