The recent decline of the Sibor made the news recently in this Channel NewsAsia article. When I wrote the first Sibor article back in February, the 3-month Sibor was around 0.65%.

After the article was published, the Sibor almost doubled from 0.65% to 1.1% in early April. This was followed by a dip (circled in blue below) towards the end of April into May. However this drop is temporary and it should rise when the US rise interest rates towards the end of the year. 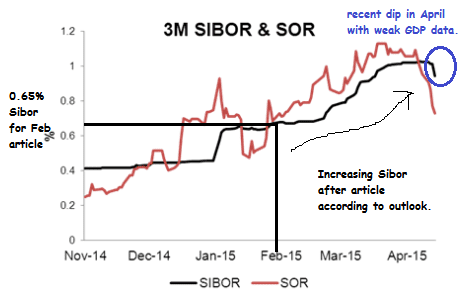 Let us look at the temporary drivers that weakened interest rates.

The first would be the relative performance of the US economy versus other major economies. The US economy grew by 2.4% in 2014 and outperformed the sagging economies of Japan and Europe. Due to climate change, the US experienced a harsh winter in the first quarter of 2014 and contracted by 2.1%. Once the frosty weather thawed, the US burst into strong growth again.

The Fed warned of the transitory effects of the harsh winter in every statement since the start of the year and the last statement in April was no exception. Consider this sentence located at the very first line of the FOMC statement released on 29 April 2015:

The Fed had already prepared the market for a weak first quarter for 2015 on expectations of a harsh winter. Despite the Fed’s warning, the market still expected a robust GDP growth in the first quarter. The market expected the US to grow by 1% and was disappointed that it grew only 0.2% for the first GDP estimate from the low base of 1Q2014.

In the US, people are more economically sensitive and they keep a lookout for official economic data to gauge the actual economic trajectory. So after seeing relatively poor economic GDP data on the news, they adjusted their outlook accordingly. This brings down consumer confidence and this is significant because consumption covers 70% of GDP in the US. As a result, the index on consumer confidence plunged from 95.9 in April to 88.6 in May.

Chief economist Richard Curtin from the University of Michigan explained this sudden and drastic drop in consumer confidence:

“Confidence fell in early May as consumers became increasingly convinced that there would be no quick and robust rebound following the dismal 1st quarter (even if the underperformance was exaggerated by inadequate seasonal adjustments). The decline was widespread among all age and income subgroups as well as across all regions of the country.”

This is reflected in the retail sales for May which came out flat. In other words, American consumers are not spending simply because they are depressed from the weak economic data which bombarded them in April. The GDP reading was just a composite of the weakness which should be expected from transitory factors such as winter.

#3 Brakes on the Labor Market

While US GDP grew slowly for the first quarter, the US labor market made steady progress ever since its unemployment rate peaked at 10% in 2010 and declined steadily to 5.4% in April 2015. This was made possible by the cheap credit granted by the Federal Reserve and the fiscal policy deployed by the US government.

The US Non-Farm Payroll grew by 223,000 for April and this was considered disappointing for economists as they had expected 228,000 new jobs. Other areas of weakness in the job market is the negligible growth in wages of 0.1% when the market had expected a 0.2% wage growth.

Put all this together and the short-term US economic didn’t look all too rosy which weakened interest rates and, indirectly, the Sibor.

Yellen’s Defence of the US Economy

However, the Fed did not sit there and allow this false impression of the US economy to take root. The Fed Chairman herself, Dr. Janet Yellen, defended the US economy as outlined in her speech, The Outlook for the Economy:

“The Commerce Department’s initial estimate was that real gross domestic product was nearly flat in the first quarter of 2015. If confirmed by further estimates, my guess is that this apparent slowdown was largely the result of a variety of transitory factors that occurred at the same time, including the unusually cold and snowy winter and the labor disputes at ports on the West Coast, both of which likely disrupted some economic activity. And some of this apparent weakness may just be statistical noise. I therefore expect the economic data to strengthen.”

Yellen acknowledged the angst caused by the weak GDP data in the market. She reiterated her stance that this is due to transitory factors such as the harsh winter and strikes. She also addressed the weakness of the resulting economic data especially the recent April weakness as statistical noise. Yellen also noted the slow but steady recovery of the housing market which means that fewer people have mortgages that are worth less than their home value. This would allow them to make purchases and increase consumption.

In addition, Dr. Yellen made the following key points:

One way which we can look at the market’s response following Dr Yellen’s speech is through the performance of the USD. When there is expectation of higher interest rates in the US, money will flow back to the US in search of yield. This will cause the USD to bid higher. Singapore would also have to offer higher yields to persuade funds not to move back to the US.

The above chart shows the US Dollar Index which tracks the spot value of the USD against the AUD, JPY, EUR and GBP. This represents 80% of the world spot activity. We can see that the USD stalled on the day of the FOMC minutes release and weakened slightly in the following day. The USD changed its tune the next day after Yellen gave her speech and went from strength to strength as seen in the chart above.

How This Affects You

You have seen how the recent events that led to a perceived weakness in the US economy. Despite the warnings of a harsh winter and other factors, the market continued to have high expectations of the US economy and this resulted in the spike to above 1% in the 3-month Sibor in April. When the economic data proved otherwise and fell short of expectations, interest rates dipped. However the US economy remains on track and this was even acknowledged by an FOMC member who wants to delay the rate hike. The accompanying recent dip in Sibor is a mere correction in this same period.

At the point of writing, the 3-month Sibor is around 0.83%. If the US economy continues to power ahead as expected, fed rates will strengthen and, in turn, the Sibor as well. The most immediate way how rising interest rates affect you is your mortgage. If you have a floating rate loan, you might want to consider switching to fixed rates instead to hedge against the rise.

Companies and REITs with sizable loans and borrowings have also started to secure fixed rates in expectation of higher interest rates down the line. Consequently, debt levels and loan rates (whether they are floating/fixed) must now be a crucial aspect of your research when analysing your investments. You don’t want to be caught in a situation a spike in interest rates causes refinancing issues in a company leading to a threat of bankruptcy.