My main contribution on The Fifth Person has always been to bring relevant macroeconomic developments to your attention and this article will be no exception. In this article, I’ll give you the background of the Greece debt crisis and how it has evolved into the current state of near default, and how it will affect Singapore’s economy and, in turn, your investments here.

Singapore is an open economy which exported a massive US$519 billion worth of goods and services in 2014. This represents 174% of our US$298 billion GDP. A Greek default would result in a subsequent Greek exit from the European Union. This is commonly termed as “Grexit”. Grexit would have far-reaching economic and geopolitical impact. Other heavily indebted countries might choose to exit the European Union as well and return to their former currencies. In this environment, international demand would shrink and our export-based economy would be badly affected.

The primary cause of Greek debt came from its ascension to the European Union which gave it the credibility to borrow huge sums of money. According to the Stability and Growth Pact, Greece is obliged to keep its budget deficit within 3% of GDP and public debt should not exceed 60% of GDP. However with creative accounting and a lack of supervision, Greece was able to run a debt of $168 billion euros in 2004 when its GDP was at $193 billion euros.

The Greek government was able to indulge in lavish infrastructure spending and pay packages for its civil servants. The icon of Greek lavishness was seen and widely reported from its hosting of the Greek Olympic Games in 2004. This was a moment of pride for the Greeks as the Olympics started in Greece and they were hosting it on the 100th anniversary of the modern Games. However the Greek Olympic stadiums and facilities cost US$7 billion according to this Bloomberg article, not including the costs of new transport infrastructure such as airports and train networks. Most importantly, the Greeks paid for the infrastructure on borrowed funds – infrastructure that did not have a positive return on investment after the Olympics ended.

These facilities were abandoned once the Olympics ended but the debt stayed with the Greek population. One prime example of the neglect would be the contrast of the same beach volleyball stadium in 2004 during the Olympics and ten years later in 2014.

While the previous Greek governments were spendthrift, this problem was exacerbated by the lack of a proper and effective tax collection system. The IMF noted that the Greek had the highest uncollected tax in the world and this does not even include tax lost through evasion. 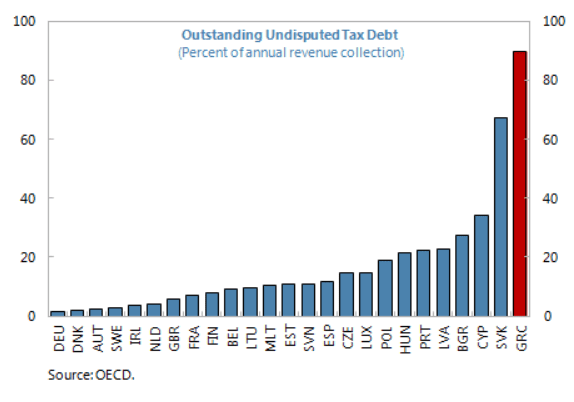 Prior to 2012, before international creditors stepped into the picture, the Greek tax system basically encouraged its people to evade taxes but the lack of tax dollars did not stop the Greeks from demanding world-class infrastructure and services. As such, the only way to finance this consumption would be through borrowing. The IMF compiled a list of the irrationality of paying taxes in Greece: 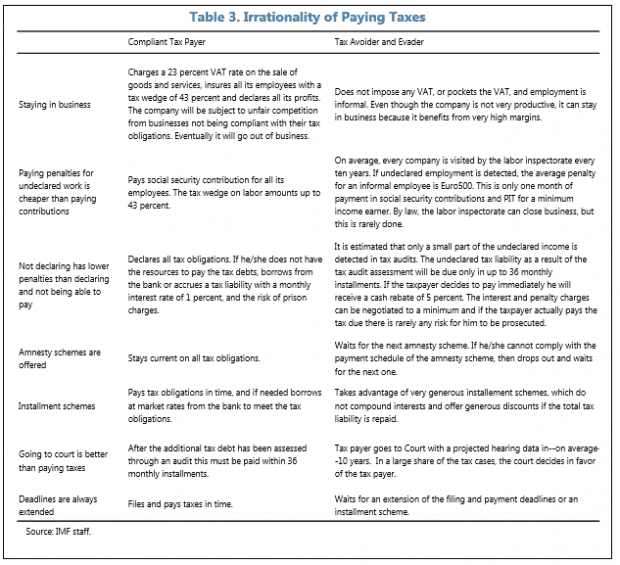 In summary, Greek tax evaders would be better off financially by not paying taxes. As such, Greece has the most number of self-employed employees in the world and they engage in informal and off-the-book employment.

All this debt ended up in the books of the Europeans banks which threatened to bring down the entire European Union (EU). The debt came from debtor nations that were not limited to Greece but included countries like Spain, Italy and Portugal. In order to save the European banking system and also the EU itself from falling apart, the IMF, EU and European Central Bank (ECB) came together to take over the debt from the banks after trimming down the debt in 2012. The advantage of such a move is that investors now know the bad debts are with those three institutions, collectively known as the Troika, and confidence returned to the banking system.

The bad news was that the Troika were very harsh on Greece and imposed austerity measures on them. The Troika had two advantages which they used to become the effective overlords of Greece regardless of who formed the next government. Firstly, Greeks overwhelmingly want to stay in the EU. Greek polls show that 74% of Greeks want to stay in the Eurozone compared to 18% that would prefer a return to the Drachma. Secondly, the Greeks were reliant on the Troika for the next tranche of payments to avoid default and to pay for basic services. The next tranche of payment came with terms and conditions which allowed the Troika to supervise the government and impose harsh reforms. Any default in payment would mean that Greece would be forced out of the Eurozone.

The Greek economy did not recover from the global recession of 2008 and its impact was reflected in its GDP from 2009 onwards. The Troika imposed austerities in 2012 which shrunk the Greek economy in 2013 onwards. Public spending was cut to pay the Troika. Even hospital services were curtailed and unemployment is currently at a high of 25%. Under the hardship of austerity, the Greek populace elected the current Syriza government who promised to keep Greece within the Eurozone and to repel the Troika imposed austerity.

Hence the current Greek government had to push negotiations to the extreme and it began to use brinkmanship tactics in order to force concession. While Greece did not have much economic leverage, it began to use its geopolitical leverage as a bargaining tool. The EU were at odds with Russia over its invasion of Ukraine and Greece made overtures to Russia. For example, as early as 19 June 2015, Greek Prime Minister Alexis Tsipras visited Russia to discuss a pipeline deal. It was also a sign that Greece was prepared to move into Russia’s orbit if it was ejected from the EU.

The current Syrzia government was less compliant than the previous Greek governments and they kicked out the Troika imposed auditors less than a week after taking office in January 2015. However the creditors were unwilling to give further concessions to Greece as it would set a bad precedent when they are negotiating with other bigger debtors such as Spain. This has been playing out in European media as both parties try to legitimize themselves first among the European population and then the world.

The latest demand from the creditors are that Greece increase its Value Added Tax (VAT), cut its pensions further and commit to a budget surplus. For the Greeks, the pension cut and tax hike were considered unfair as it would impose considerable strain on its population. These pensions also served as social safety net as unemployed workers can tap into their equivalent of our CPF for living expenses as their layoffs would be designated as early retirement. The budget surplus commitment would prevent the government from extending much needed services. The current Greek government had to agree by June 30 or it would face default and expulsion from the EU.

The effect of this gridlock sent confidence levels down. Greeks were fearful of a banking collapse and started to withdraw large amount of euros. The ECB had to lend money to the Greek Central Bank on an emergency basis for the Greek banks to remain open for business. The weight on the global economy is that if Greece was forced to exit the Eurozone, it could pave the way for other larger debtor nations such as Spain, Italy to leave the Euro. If the Greek issue were to worsen and other countries leave the Eurozone, it would be highly bearish situation for the EU. All the progress which was made through reforms and the Investment Plan for Europe would vanish as the political impact would outweigh the economic logic.

So while the banking contagion has been lifted, the EU could still unravel with Grexit and the economic damage could rival that of the bursting of the housing bubble in the United States in 2007. Grexit could potentially be the starting block of falling dominos that would trigger other European nations to exit the Euro and spell the beginning of the end for the single currency.

In addition, the Grexit economic punishment would be similar to the intensity of Bear Sterns collapse in March 2008. It would be shocking and painful but merely a harbinger of darker events. The collapse of Lehman Brothers on 15 September 2008 froze financial markets worldwide and signalled the start of the Great Recession. The equivalent of the Lehman Brothers collapse could easily be the exit of Spain or Italy from the Eurozone or Greece being absorbed into the Russian Federation. This happened to parts of Ukraine by force but Greece can also be enticed by the carrot of economic security as they would be desperate by then. Their default would cut them off from international debt markets and they would not be able to import sufficient basic necessities with their devalued Drachma.

Either event will cause the European stock market to plunge and this panic would spread to other major economies like the United States and China. As mentioned earlier, Singapore is a small and open economy. The main source of our wealth comes from servicing the rest of the global economy by virtue of our linkages to the world and reputation for good governance. However when the rest of the world cuts down on their spending and plunges into a recession, we will feel the effects instantly.

Hence the best case scenario for Singapore and the world is that both the Troika and Greece pull back from the brink and find a permanent solution. This would require debt relief and painful reforms from the side of the creditors and debtors respectively. Both are immensely difficult to sell to their respective constituents as it would require sacrifice.

Debt relief would be seen as using German money to subsidize the Greek lifestyle or even be seen in terms of Germany giving into Greek blackmail. Greek reforms would mean less money for Greek pensioners for retirement and more layoffs in the public sector. That triggered violent street protests in the past and would create further unrest in the future.

This is why we are likely to see a partial solution and both sides will push negotiations to the brink in order to extract maximum concessions. Hence we are likely to see this bad drama being replayed in the news in the near future. All this uncertainty is weighing on Singapore’s stock market and markets around the world. So until the drama is fully played out and a permanent solution is found, the shadow of Grexit still looms large.