Investing is not necessarily an activity where the smartest person always wins the race. Just like the parable about the tortoise and the hare, there are times where being slow and steady wins you the race. While it is true that backing the right horse will bring you positive returns, this has to be coupled with correct a steady emotional state and an understanding of current market conditions.

What I’m talking about here are the dangers of being overconfident in a rising market. Yes, bullish markets can actually lose you money when prices keep rising and you believe you have a hot hand and can do no wrong. Investopedia defines the hot hand as the belief that because you have a string of successes, you will continue to experience future success. When applied to investing, this might lead you to believe every stock you pick is going to rise even further (which can happen during a bull market – a rising tide lifts all boats) and you start to invest more money than you can actually risk.

However, when the market finally turns and the pendulum swings the other way, you’re suddenly left staring at losses you were not prepared for. Fearing further losses, you sell your stocks in a panic erasing all your hard-earned profits in the process. This is when the hot hand fallacy is revealed.

Let me illustrate why it’s sometimes better be the tortoise than the hare when it comes to investing.

Let us take the SPDR S&P 500 ETF (SPY) as an example. The SPY has made steady gains since February 2009 after the worst of the global financial crisis had passed and with the support of the Federal Reserve: 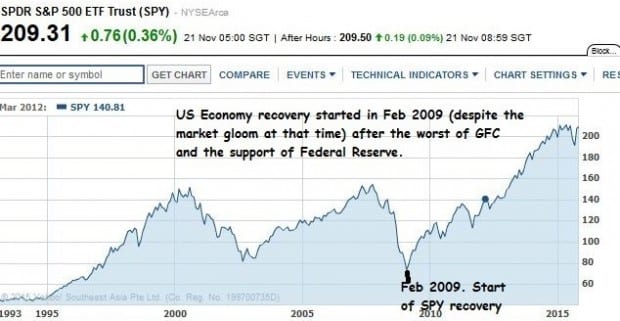 If you invested steadily in the SPY from February 2009 through dollar-cost averaging on a monthly basis, you would have been made quite a return. Your initial investment would be worth 2.4 times today as the SPY went from $87 to $209 today.

This is the tortoise approach to investing. Simply open a monthly investment plan with financial institutions such as POSB or Citibank (or any other reputable financial institution) and simply commit a certain sum of money per month to it. The tortoise does not care about the daily volatility of the market as long as he knows that the U.S. economy is on a path of steady, long-term recovery.

The hare on the other hand is a lot savvier. He could tell that the sudden plunge in the SPY on 17 August 2015 was due to China’s stock market crash as investors around the world panicked. The hare understood this was an over-reaction and waited to re-enter the market when things settled down. Take note of the dates and prices in the chart below as I’ll be using it moving forward in my illustration.

Now let me know introduce you to two hares – Hare A and Hare B. Both hares are pretty savvy investors and understood the market dynamics behind the SPY’s August plunge. They started to accumulate their positions over a period of three months after the SPY double-bottomed in September. The two hares start to make profit as the SPY rises steadily over the months. The only difference is that Hare A is becoming overconfident and believes that the market will only continue going higher and higher while Hare B remains calm and steady.

Let’s have a look at their results: 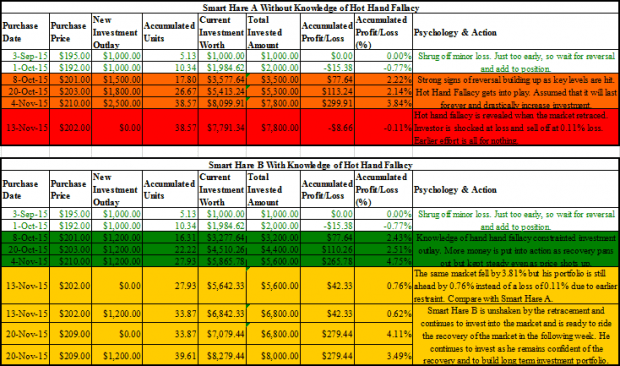 Please note that units are counted in decimals for calculation purposes. In real life, units have to be in whole numbers.

As you can see from the table above, in the end Hare B was the successful investor while Hare A was swept away by the market. What was the difference?

By now the hot hand fallacy had taken root and Hare A made the assumption that the market will continue to rise further after three consecutive winning trades. However the market is not always your servant. Over the next nine days, it fell 3.8% by 13 November 2015. Hare A was shocked to see his hard-earned profits of 3.84% erased entirely to -0.11%. His earlier enthusiasm had worked against him. Worried that the market might fall further still and unable to stomach larger losses if he held on, Hare A decided to sell his positions. He exited the market wounded with a loss but, more crucially, with possible lasting damage to his investment psychology.

Hare B was more measured and calm. He knew that just because the market was moving up, it didn’t mean that it cannot fall suddenly. When he made a gain, he responded with a more modest increase in his investment outlay to $1,200. As the market continued to rise, he chose not increase his investment outlay further. He understood the hot hand fallacy and was not surprised when the market made a significant drop of 3.8%. Even then, he was still ahead of the game as his portfolio value was still higher than his original investment. The market noise did not affect him and he continued to have faith in his original assessment.

So while Hare A is already out of the market, Hare B continues to invest. He invested another $1,200 and when the SPY rebounded to $209 on 20 November, he was now sitting on 4.11% in gains. Even now, he does get overly excited. Hare B is a long-term investor and, while his bullish thesis is still intact, he continues to invest knowing it will pay off in the future.

The actions and mindset of Hare A and B serve to illustrate the importance of understanding the lessons of the hot hand fallacy.

What about the Tortoise?

Just in case anyone is wondering, what happened to the tortoise? Well the tortoise is not as savvy as the hares and only practices dollar-cost averaging. He could not tell if the SPY decline was due to short-term effects or not. So he just continued to invest $1,000 on the first trading day of every month. And his results?

The tortoise is actually ahead of Hare B with a return of 5.19%! In this example, it shows that if you’re unable to manage your emotions and psychology when investing, it might be better to employ a no-brainer method of investing like dollar-cost averaging. That said, Hare B has the advantage of choosing not to invest when he is of the opinion that the markets are bad. This is something which is not available to the tortoise. If we pulled the time frame back to July 2015, Hare B will be ahead of the tortoise.

If you are an active investor, it is important that you understand your own investment psychology. A rising market can always reverse and retracements may go deeper than expected, this it is important to always manage your position sizing and not fall for traps like the hot hand fallacy.

After reading this article, I hope that you understand that a rising market can be dangerous for the undisciplined investor. This is a timely advice as the SPY is now on an uptrend riding on the steady recovery of the U.S. economy. While you might make profits going long on the SPY, please do not be overconfident and repeat the same mistake as Hare A.

If you are too busy to invest actively, a steady approach to investing will also help you greatly in the long term. A disciplined dollar-cost averaging investment program with a suitable bank or brokerage will put you miles ahead of the average investor. Thanks for reading and I hope to see you here soon again!