I last wrote about Yahoo more than a year ago on whether the company could find a way to unlock its value. Riding on the back of a historically high Alibaba share price and flushed with cash from the Chinese company’s successful IPO, Yahoo was trading near $50.

Since then, Yahoo’s share price has fallen to as low as $27 as the board flip-flopped on how best to unlock the value of its Alibaba and Yahoo Japan holdings.

The most obvious route was for Yahoo to simply liquidate its stakes in Alibaba and Yahoo Japan but doing so would hit the company with a 38% tax bill. After much deliberation, the board decided to pursue a spinoff of its Alibaba stake into a holding company to avoid the tax hit — only to reverse its decision last December when the IRS wouldn’t rule on whether the spinoff would qualify as a tax-free transaction.

Instead, Yahoo now seeks a Reverse Morris Trust (RMT) spinoff of its core business and its stake in Yahoo Japan — which essentially means Yahoo is up for ‘sale’. The news that Yahoo is prepared to unload its core business has attracted the interest of Time Inc. and Verizon. Verizon bought AOL in a similar deal last year and its CEO recently confirmed its interest in buying Yahoo. It remains to be seen whether Yahoo will be bought by any of its suitors or simply proceed with the reverse spinoff, but Yahoo is already up 13.8% the last month to date since the news broke.

But as it is, Yahoo is still undervalued now as it was a year ago. 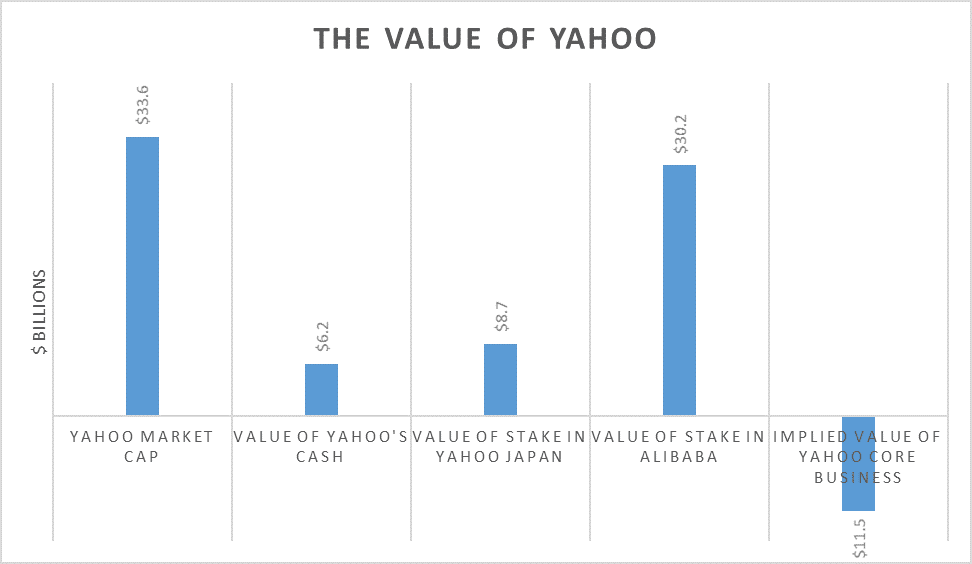 The total value of Yahoo’s cash and stakes in Alibaba and Yahoo Japan is worth $45.1 billion but Yahoo’s market cap is around $33.6 billion which implies that its core business is worth a negative $11.5 billion – which obviously doesn’t make a lot of sense.

But then again, investors have undervalued Yahoo for some time now for fear that Yahoo will be slapped with a massive tax bill from Uncle Sam when it tries to unload any of its assets. Also, I’d like to caution that even though Yahoo is undervalued, its core business is underperforming; revenue has been falling and the company plans to lay off 10% of its workforce in a bid cut costs.

Also, if the board does a U-turn (again) and a sale or spinoff doesn’t materialize, then investors are back to square one. But if a sale or a tax-free spinoff is successful then there could still be some value in Yahoo left to be unlocked, but it’s definitely not something you should bet the house on.