2017 was a tumultuous year for Singapore Post (SingPost) as it suffered a S$185 million impairment loss on TradeGlobal amid accusations of serious lapses in corporate governance surrounding the acquisition of the e-commerce provider. The previous board, except for two directors, was removed and a new CEO was appointed after the incident.

At the 2017 annual meeting, the new management team took pains to handle the fallout from the acquisition and set plans to turn the company around. So this year I’m back at the AGM to observe how the turnaround plans have (or haven’t) panned out.

Here are seven things I learned from the 2018 Singapore Post AGM:

1. SingPost’s e-commerce segment losses narrowed from $33.8 million to $16.7 million. According to last year’s AGM, TradeGlobal lost two major customers which contributed 40% of SingPost’s revenue. The management mentioned that they’ve plugged the 40% gap with a new range of customers which are growing well. This has contributed to TradeGlobal‘s fourth quarter revenue growth of 19%.

2. A shareholder pushed SingPost to redevelop its existing properties as he noticed that the property segment contributed the second highest operating profit to the company. Chairman Simon Israel say property is a core asset of SingPost and the management is always looking to maximize the yield of a property asset. For example, SingPost Centre was redeveloped into a new five-storey retail mall and opened its doors in October 2017. The newly-developed mall has helped increase SingPost’s revenue and profit. Unfortunately, he added that most of SingPost’s properties are leasehold and some are designated for specified use. Therefore, there isn’t a property at the moment with the same developmental potential as SingPost Centre. 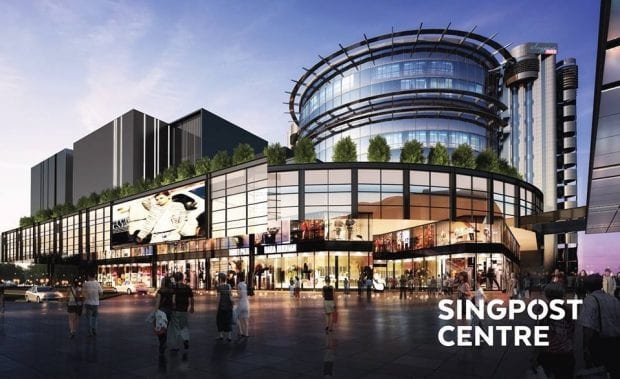 4. Logistics segment’s operating profit decreased 55.9% to $10.4 million. Firstly, this was due to a provision of bad debt for a customer in Hong Kong. SingPost has since appointed a new country manager to turn its Hong Kong unit around. Next, Quantium Solutions opened its new regional e-logistics hub in November 2016. In 2017, the building recorded a full-year’s depreciation which also reduced operating profit.

5. The gross merchandise value of the e-commerce market in Singapore is about $5 billion. Group CEO Paul Coutts expects this to at least double and estimates SingPost’s market share of e-commerce logistics and parcel to be around 20%.

6. A shareholder asked how SingPost is able to compete with regional players when the Singapore market is so small. CEO of Postal Services Woo Keng Leong agreed the Singapore market was rather small which is why SingPost has shifted to growing its presence in regional markets. For instance, SingPost’s international mail revenue is already larger than its domestic mail. (In comparison, some national postal services’ domestic mail revenue is at least ten times larger than its international mail revenue.) In a nutshell, SingPost is not limited by Singapore’s market size as the company is doing well regionally. As a side note, SingPost also wins lots of international awards for innovation and is looked upon as a role model in the industry.