During this pandemic, some of us turned to new hobbies like baking and gardening, while others turned to day trading, with financial markets surging despite deteriorating fundamentals. The hunt for yield has led investors into a myriad of exotic bets.

Looking ahead, there are three major sources of risk in the coming year, which one should note when making investments.

Global stock market valuations appear highly optimistic using a myriad of measures. Upon announcement of the Pfizer vaccine’s FDA approval on November 8, 2020, the Dow Jones index rose 5.7%, S&P 500 rose 1.2%, and the small-cap Russell 2000 rose by 3.7%. Investors flocked into travel, hotel, and leisure stocks that were hardest hit by the pandemic.

All seems good, but let’s not forget that the distribution of the vaccine poses some challenges. First, although COVID-19 vaccines are being made available all around the world, recovering to normalcy will still take at least half a year. Second, the 90%-effective Pfizer vaccine requires a storage temperature of -75 degrees Celsius while the Moderna vaccine requires a storage and transport temperature of -20 degrees Celsius. Both test the capabilities of global cold supply chains infrastructure. Even developed countries like the United States and Germany lack the ‘last mile’ infrastructure to handle and administer millions of vaccines.

The recovery test extends to international relations as decisions made by some countries will affect others. For example, India, a large low-cost manufacturing hub for personal protective equipment – crucial for medical and front-line workers – decided to ban exports to prioritise domestic use.

Protectionist measures may carry long term consequences and create uncertainty around future trade negotiations. In my recent research studying the relation between trade & economic policy uncertainty on supply chain networks, my co-authors and I find that in response to higher uncertainty around trade policy, firms may reconfigure global supply chains. The risk exposures of those firms change depending on where their main sources of revenues are.

For example, for American firms serving the Chinese market, production in America may actually decrease and those firms may instead move their supply chains to Vietnam in order to maintain the same customer base and mitigate the risk of U.S. trade policy. (Exacerbating the trade policy uncertainty, the United States Department of Treasury designated Vietnam and Switzerland ‘currency manipulators’.)

Stocks more exposed to fiscal support or more sensitive to interest rate variations will tend to exhibit both higher volatility and lower returns. For example, suppose a software company is currently not profitable but is expected to generate a risk-free profit of $1 billion in 10 years. At a 0% interest rate, the future cash flow company is worth $1 billion, but if the 10-year interest rate increases to 1%, the future cash flow is only worth around $900 million, meaning that a 1% increase in interest rates would decrease the value of the investment by 10%.

As economic stimulus wanes due to the diminishing marginal effects of monetary policy stimulus (as seems to be the case for the Bank of Japan, which has been at the forefront of experimentation with unconventional monetary policy), the effectiveness of fiscal stimulus subsides. As economies begin to recover, stocks of companies with strong fundamentals will likely outperform those whose ability to generate cash flow is weak. Therefore, stocks with stable operations and finances may become increasingly attractive to investors.

Fuelled by low interest rates, cheap credit, and low inflation expectations, financial markets have valued future cash flows higher and higher. As a consequence, growth firms which may not have much fundamental strength now are priced aggressively by the market. In particular, driving much of the global financial market returns over the past several years are the notorious FAANGM (Facebook, Amazon, Apple, Netflix, Google, Microsoft).

Buying the S&P 500 implies a large purchase of the six big tech stocks as they currently make up almost 25% of the index, a concentration double of the long-term average of 12.5%. The market concentration is larger than at any point in the last 30 years, including the ‘dot-com’ bubble (but not higher than what has been observed from data from over 400 years).

Investing in big tech stocks entails betting on the anti-trust regulation maintaining its status quo around the world. The United Kingdom has also put forth proposals to introduce a new legally binding code to stop large technology companies from harming consumers and hampering the emergence of rivals. It would envisage penalties such as fines of as high as 10% of a company’s global net sales. The European Union, Australia, and Japan are considering similar paths.

More aggressively and recently, in the United States, 46 states attorneys general filed a law suit against Facebook, alleging it violated competition law by initiating ‘killer acquisitions’ of competitors. The suit calls for the breakup of Facebook, Instagram, and WhatsApp. Similar anti-trust investigations are being done for Apple and Google by the Federal Trade Commission in the United States due to the companies’ pricing of their respective smartphone application stores.

In a market that has become increasingly narrow over the past several years, what do all these regulatory incidences mean for investors? The large tech companies have produced positive market returns this year, especially during a work-from-home boom. But they face underlying risks too.

In short, the investment landscape in 2021 looks increasingly stretched. Crucially, all these vaccine, geopolitical, trade, and economic policy risks are correlated.

The bottom line: there are likely greater diversification benefits of having international investments. In a world where economies are less integrated, the stock returns of different markets become less correlated. Correlations between different geographical regions fall as well.  For example, on 3 Dec 2020, a bill that would delist Chinese companies not following American audit rules was unanimously passed by the U.S. House of Representatives, potentially leading to an exodus of Chinese companies from the U.S. capital markets. This would continue the trend of decoupling between the two global economic powers.

Finally, international diversification without currency hedging would also reduce exposure to the U.S. dollar, which has lost over 12% since its peak in March 2020. Interest rates in the United States are likely to remain fixed at zero in the near term and the Federal Reserve is suggesting there is little chance of an interest rate hike before 2023. As other countries start to recover and undo the expansionary monetary policy, we would expect continuing depreciation of the U.S. dollar, further highlighting the benefits of international diversification. 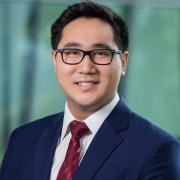 Ben Charoenwong is an assistant professor of finance at the National University of Singapore (NUS) Business School and head of research at Chicago Global, a quantitative global investment fund.