This article actually came about because a member of ours asked how we manage foreign exchange volatility whenever we invest in foreign stocks or, for that matter, stocks which are denominated in foreign currencies (some local stocks are traded in foreign currencies). I gave him my reply over email and I thought this was useful to also share with our readers at large.

So, first things first, what is foreign exchange (forex) volatility? It is basically the amount of risk with the size of changes in forex rates.

How does this affect your returns? For example, let’s assume that you’re a Singaporean (and, therefore, your home currency is the Singapore dollar) and you bought XYZ company for USD10. If the USD/SGD exchange rate is USD1.00 to SGD1.40 at that time, then your effective purchase price for XYZ is SGD14.

So even though, XYZ gained 100%, you effectively only earned 85% returns because the forex rates went against you. Of course, on the flip side, forex rates can also move in your direction and help earn you a larger return.

Now if your investment capital is small, these fluctuations might not seem significant at first. But the larger your fund grows, forex volatility will become more of a concern as the movements can mean the difference of a few thousand dollars (or more).

So back to the point about this article, how can you manage forex volatility when investing in foreign stocks?

Obviously, there is a cost to setting up a hedge. If your trading sum is small, then this will not make sense (and you might also not meet the minimum contract amount). But if you’re one of the big boys, then hedging is definitely one way to minimise foreign exchange volatility.

2. Invest in countries with stable currencies

The second way is to invest in countries with stable currencies. For example, the Hong Kong dollar is a relatively stable currency thanks to Hong Kong’s robust economy and the fact that the HKD is backed by one of the world’s largest foreign exchange reserves. This makes Hong Kong a good place to shop for stocks – especially when the market there hit very attractive valuations early this year.

The Thai baht has also been relatively stable against the Singapore dollar. If you look at the two-year SGD/THB chart, you see little fluctuations with the exchange rate mostly hovering around SGD1 to THB25: 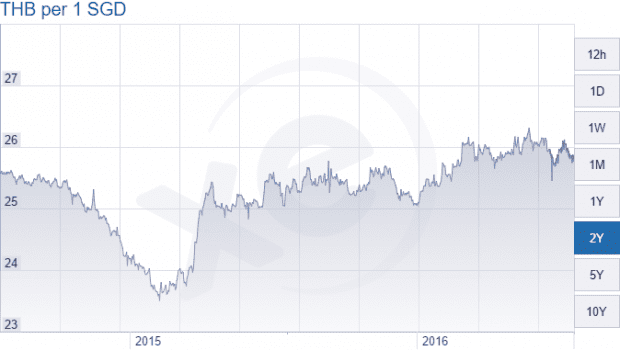 Thailand also has a healthy economy driven by strong domestic consumption (over 67 million people) and is one the reasons why we cover this market in Alpha Lab.

3. Invest in countries with ‘undervalued’ currencies

The third way is to invest in a country whose currency is relatively undervalued, so you actually gain from foreign exchange rates when the currency appreciates. Of course, it can be difficult to determine if a currency is ‘undervalued’ and some of these currencies might be more volatile in nature (which beats the purpose).

The Chinese yuan has been accused by critics of being significantly undervalued for the longest time. A cheap yuan allows China to keep its exports competitive, allowing Chinese companies to grab market share in foreign markets by beating out products priced more expensively. However, the yuan has risen in value over the last ten years relative to the U.S. dollar: 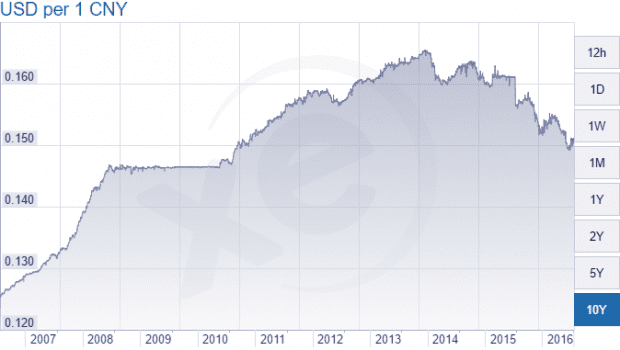 Of course, this doesn’t mean that you should jump headfirst and invest in Chinese companies just because the yuan is cheap (be careful out there!); it only means that if you do invest in a stock traded in renminbi, the long-term exchange rates could work in your favour.

On a related note, if your home currency is weakening, it definitely makes more sense to invest overseas. For example, a Malaysian who invested in Singapore just five years ago would be happy to see that every Singapore dollar is now worth nearly 3 ringgit (up from 2.4 ringgit in 2011)!

In conclusion, foreign exchange volatility cannot be fully eliminated but it can be reduced and managed to suit your portfolio needs. At times, we might invest in a foreign stock even though forex rates could move against us because our expected returns far outweigh the risk in forex volatility.

Investing overseas also allows you to diversify your portfolio instead of sticking to your home currency. Remember, even investing entirely in local stocks doesn’t mean you can always avoid foreign exchange volatility – some local companies have foreign investments and income (e.g. Singtel has Australian, Indian and Indonesian exposure), and their financial results can be drastically affected by forex movements.

At the end of the day, you could choose to invest only in your local market and try to avoid foreign exchange volatility as best you can, but this means you are limited to the size and potential of your local economy. Maybe it’s not a problem if you live in the U.S. with the world’s largest economy at your doorstep, but it’s definitely an issue if you’re Singaporean and your country only has 5 million people to market to. How big can you grow?