I recently opened a bank account at Public Bank. When I was at the branch, it was noisy, chaotic and felt like a visit to a government department. I had to fill up an account opening form that was badly photocopied, waited in line for close to an hour before finally getting my bank account opened. I was issued a savings account passbook — the type where you have to slot into an ATM to update its balance.

Yes, it is 2017 but that’s how an average person still opens an account at Public Bank. It may be very old school and given that Public Bank Berhad (Bursa: 1295) is the third largest bank in Malaysia by asset size, one would assume there are easier ways to open a bank account electronically.

However, I know one group of people who are not complaining: Public Bank’s long-term shareholders. Public Bank has been one of the best-performing stocks in Malaysia over the past twenty years. If you invested in Public Bank in 1992 and reinvested your dividends, do you know who you would be today?

You would be a millionaire.

If you invested about RM15,000 in Public Bank’s shares in 1992 and reinvested the dividends, you would be sitting on RM1 million worth of Public Bank shares today.

Over the past 25 years, the bank has returned more than 6,500% to its shareholders. That is about 20% annual returns on average. No wonder you always hear cheers and praise for Public Bank’s founder and chairman, Tan Sri Teh Hong Piow, and it was no different at Public Bank’s most recent AGM.

So what is driving all that growth in Public Bank over the past two decades?

1. Tight cost control. It all comes down to detail to cost and profitability. Public Bank is one of the few banks that has been consistently generating stronger and stronger profit every year. The bank has achieved that by putting strict controls on cost (hence the poorly photocopied form). Its cost to income ratio is only 32% for 2016. In comparison, most banks in Singapore has a cost to income ratio of more than 40%.

2. Rising profits. Over the past decade, Public Bank has been able to grow its net profit from RM1.7 billion to RM5.2 billion. That is an annual growth rate of 11.8%, very impressive for a large bank. 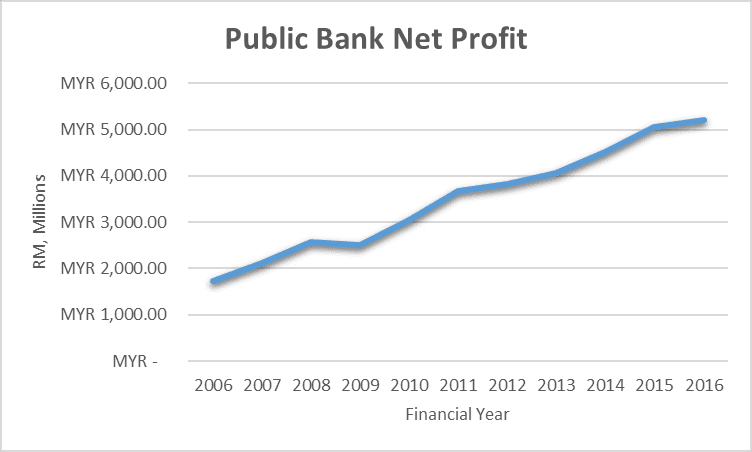 More importantly, one key reason why Public Bank has been a favourite among investors in Malaysia is due to the positive relationship between its earnings and its dividend per share. 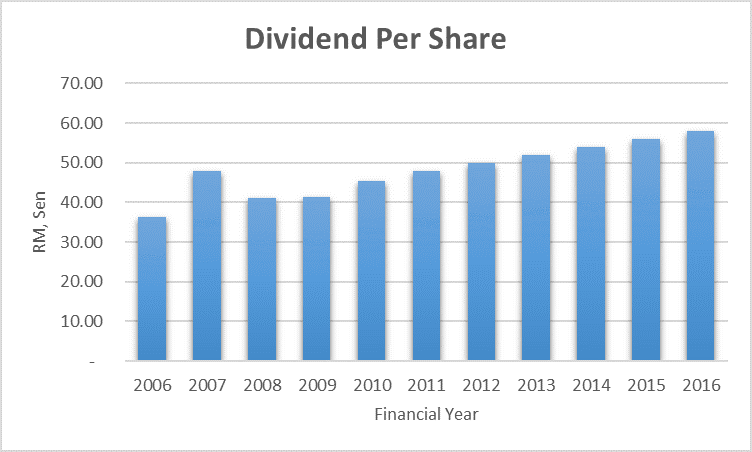 3. High return on capital. Public Bank has been able to achieve a return on asset ratio of about 1.8% for the past five years. This means for every RM100 in assets that the bank holds, it has been able to generate a profit of RM1.80.

It may seem like a very low return on asset figure, especially if you compare this to other industries like the medical or utility industries. However, for a bank that is a stellar return on capital. In comparison, its peers such as Malayan Banking or CIMB Group Holdings have been ranging around 0.75% to just 1.3% over the same period.

This shows Public Bank’s superior ability in managing its assets compared to its peers. Therefore, behind the image of an old, crowded, and chaotic firm is a highly efficient operation at work within the bank.

4. The role of the founder. The high return on capital and the low cost to income ratio can all be pointed to having a strong leader at the helm of the company. Tan Sri Teh Hong Piow continues to hold about 24% of the company, which contributes the majority of his personal wealth. Therefore, he has a very strong incentive to maintain Public Bank’s operational excellence and the dividend policy. Public Bank is one of the few banks left in Malaysia that is still managed and owned by its founding shareholders.

Moreover, there are questions surrounding what will happen to Public Bank after Teh Hong Piow. After all, Tan Sri Teh is 87 this year and none of his children have expressed any interest in the business. Although the bank has a solid group of top managers in place for many years, it is still unclear how the bank will change when it transitions from an owner-led bank to a professionally-run financial institution.

It is easy to judge a company from our personal experiences. However, that could be a big mistake. My personal experience at Public Bank was not a pleasant one but if I am making an investment decision purely based on that experience, I would be making a big blunder. That is because my own experience is just a sample size of one and could be highly inaccurate.

After all, the company’s track record and financials certainly paint a much brighter picture than my experience.  Therefore, when researching on a company, always look at it from all perspectives. Your personal experiences combined with the company’s track record, financials, peer comparison, and maybe even an interview with its customers and employees will give you a much better picture of the whole operation.