First REIT listed on the SGX on 11 December 2006 as the first healthcare REIT in Singapore. It owns hospitals, nursing homes, and rehabilitation centres located in Indonesia, Singapore, and South Korea. As at 31 March 2018, First REIT’s portfolio is valued at S$1.35 billion. In this article, I’ll bring an overview of First REIT’s performance since its IPO and its growth prospects for the near future.

Here are 12 things that you need to know about First REIT before you invest.

1. Indonesia has been a key income contributor and growth driver for First REIT. In 2006, First REIT was listed with a seed portfolio comprising four hospitals in Indonesia. By 2017, this had expanded to 16 hospitals and healthcare assets. These assets are leased on a triple-net lease arrangement where tenants are responsible for operating costs such as maintenance, certain taxes, and insurance. Rental income derived from Indonesia is pegged to the Singapore dollar, mitigating forex risk. Over the last 10 years, First REIT has a compound annual growth rate (CAGR) of 15.21% in revenue from Indonesia, from S$25.7 million in 2007 to S$106.2 million in 2017. 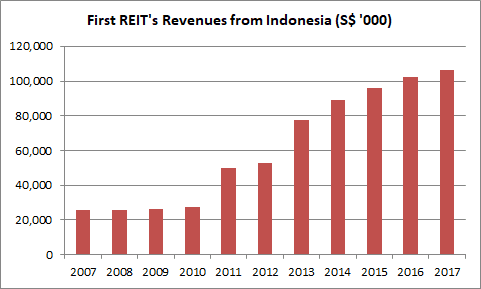 2. First REIT currently owns three nursing homes in Singapore. Similarly, these nursing homes are leased on a triple-net lease arrangement. In 2011, First REIT sold Pacific Cancer Centre @ Adam Road which resulted in a drop in rental income in its Singapore portfolio. Since then, it has posted stable growth in revenue, from S$3.0 million in 2011 to S$3.8 million in 2017. 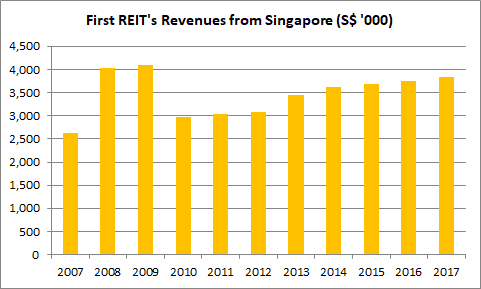 3. In 2011, First REIT acquired Sarang Hospital in South Korea for US$13.0 million. It is a six-storey hospital located in Yeosu City. It is also leased under a triple-net lease agreement, and rental income is denominated in U.S. dollars. In 2014, First REIT saw a drop in income from Sarang Hospital as its annual rents were revised downwards. Since then, Sarang Hospital has shown a small increment in revenue, from S$0.8 million in 2014 to S$0.9 million in 2017. 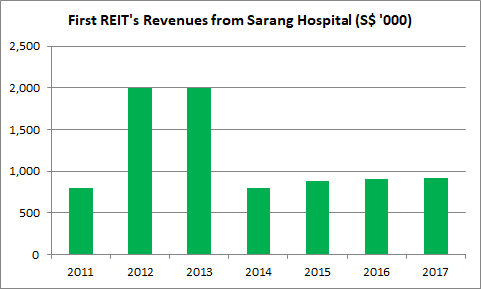 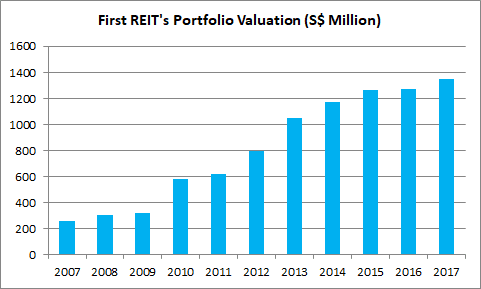 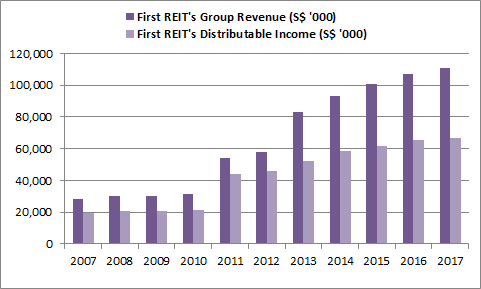 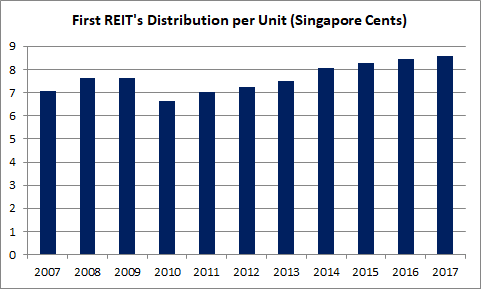 7. As at 31 March 2018, First REIT reported S$488.2 million in total debt and a gearing ratio of 34.1% — well within the 45% limit regulated by the MAS. This provides the REIT with ample debt headroom to finance acquisitions or to carry out asset enhancement initiatives.

8. As at 31 March 2018, First REIT recorded 100% occupancy rate for its overall portfolio. Its weighted average lease expiry (WALE) is 9.3 years and its earliest lease renewal is in August 2021 for Sarang Hospital in South Korea. Looking forward, the REIT will very likely continue to generate stable income from its portfolio for the next 10 years. A list of First REIT’s assets and their lease expiries are as follows:

9. Most of First REIT’s Indonesian lease agreements have built-in rent escalation of 0% to 2% per annum; the exact annual escalation is based on the Singapore consumer price index. Meanwhile, its Singapore leases have a fixed escalation rate of 2% per annum. This arrangement provides downside protection and stable increments in rental income to the REIT over the long run.

10. First REIT completed two acquisitions in 2017: Siloam Hospital Buton & Lippo Plaza Buton for S$28.5 million in October and Siloam Hospitals Yogyakarta for S$27.0 million in December. As both assets were acquired near the end of 2017, they will only begin to record full-year contributions in 2018. 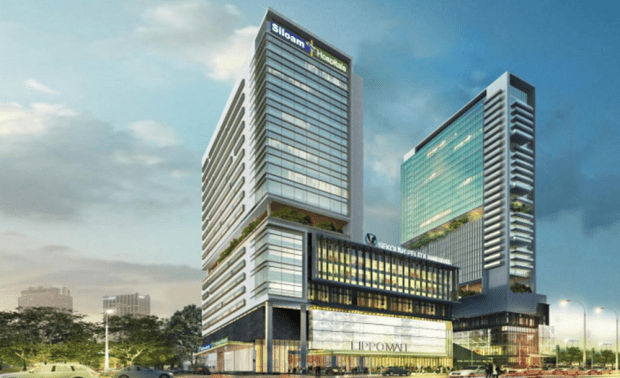 Construction of its new hospital is currently ongoing and is scheduled for completion by 2019. The new hospital will be acquired by First REIT when completed, and start to contribute revenue to the REIT.

Indonesia remains the key growth area for First REIT as it remains under-served in the healthcare sector; the country’s bed-to-patient ratio (0.9) and doctor-to-patient ratio (0.3) is among the lowest in ASEAN. The board has expressed optimism in Indonesia’s healthcare sector prospects with growing demand for healthcare-related services and the progress of Jaminan Kesehatan Nasional, a national health insurance system, which targets to cover the country’s entire populace of 260 million by 2019.

First REIT has built a track record of delivering growth in revenue and distributable income over the last 10 years. Moving forward, the REIT has laid a firm foundation to sustain growth with its favourable lease agreements and strong pipeline of ROFR properties for potential acquisitions in the future.