Frasers Commercial Trust (SGX: ND8U) is a Singapore REIT that invests in a portfolio of commercial office properties. As at 30 September 2017, it has six properties located in Singapore and Australia valued at S$2.1 billion. 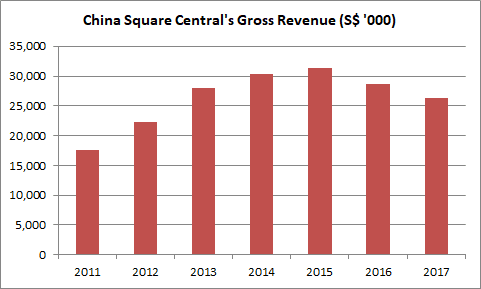 3. 55 Market Street is a development that comprises 15 floors of office space and two floors of retail space located at Raffles Place, Singapore. In 2017, the property is valued at S$139.0 million, accounting for 6.6% of FCOT’s portfolio value. It enjoys a 90% occupancy rate with a pool of 17 tenants. Corporate Serviced Offices Pte Ltd is the main tenant as it leases 16.6% of the total net lettable area (NLA) of the building. Overall, 55 Market Street has been contributing S$5-S$6 million per annum in gross revenue since 2012. 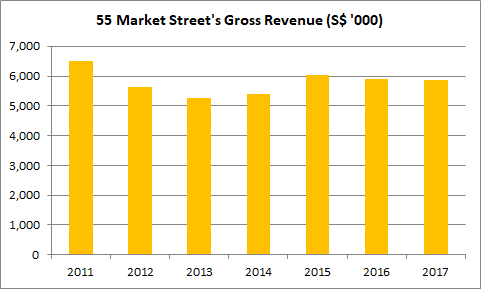 4. Alexandra Technopark is a development that comprises two high specification business space blocks located at Alexandra, Singapore. The property was acquired by FCOT on 26 August 2009 for S$342.5 million. In 2017, it was valued at S$508.0 million, accounting for 24.2% of FCOT’s portfolio value. Before 2014, the property derived a fixed master lease rent of S$22.0 million annually from Orrick Investments Pte Ltd. On 25 August 2014, the master lease was not renewed which allowed FCOT to receive rental income directly from its tenants at Alexandra Technopark. As a result, FCOT reported an increase to S$50.0 million a year in gross revenue from 2015 to 2017. 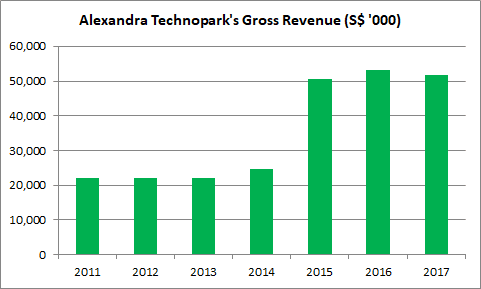 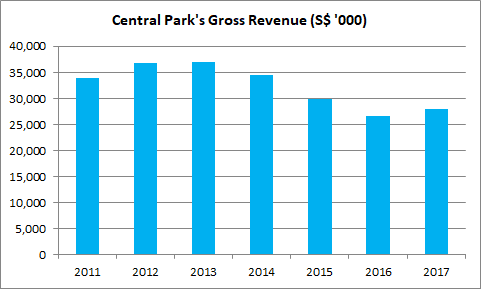 6. FCOT acquired a 50% interest in Caroline Chisholm Centre on 18 June 2007. Subsequently, it acquired the remaining 50% interest on 13 April 2012. Combined, the acquisition price for the property was S$244.4 million. In 2017, Caroline Chisholm Centre is valued at S$265.9 million, accounting for 11.6% of FCOT’s portfolio. The building is a five-storey Grade A office complex which is leased to the Commonwealth Government of Australia for a lease term of 18 years commencing on 5 July 2007, with a 3% annual rent increment. Gross revenue has dropped from S$25.3 million in 2013 to S$22.2 million in 2017 due to the weakening of the Australian dollar against the Singapore dollar. 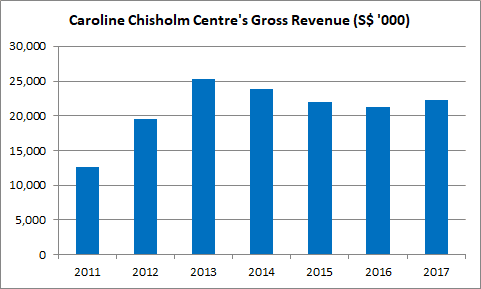 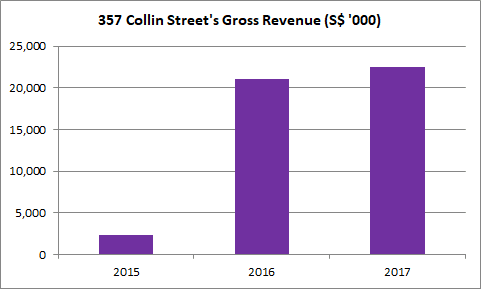 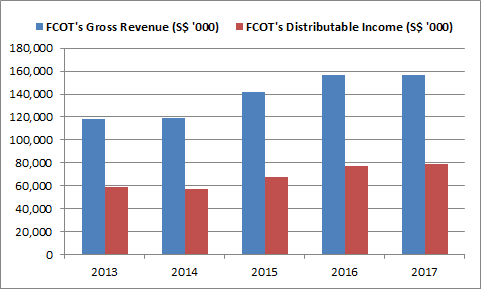 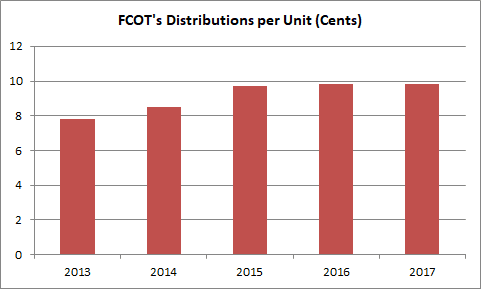 10. As at 30 September 2017, the top 10 tenants accounted for 59.9% of FCOT’s gross rental income. Of which, five of these tenants have long-term leases, adding to FCOT’s income visibility for years to come:

11. FCOT is embarking on a S$38 million AEI to rejuvenate the retail podium at China Square Central. Upon completion, it expects to increase its NLA from the current 64,000 square feet to 75,000 square feet. The project is expected to start in Q1 2018 and completed by mid-2019, which is in conjunction with the launch of the Capri by Fraser Hotel at China Square Central.

13. On 14 December 2017, FCOT and its sponsor, Frasers Centrepoint Limited entered a 50:50 joint venture agreement to purchase Farnborough Business Park for £174.6 million (or S$314.8 million). It is a 46.5-hectare freehold business park comprising 14 commercial buildings with a total NLA of 555,000 square feet located west of London, United Kingdom. It has a long weighted average lease expiry of 8.3 years and enjoys a 98.1% occupancy rate with a tenant base of 36 tenants. The acquisition is expected to be completed January 2018.

14. Hewlett-Packard as a collective group — Hewlett-Packard Enterprise Singapore (HPE) and Hewlett-Packard Singapore (HPS) — accounted for 18.2% of FCOT’s gross revenue in 2017, making it a significant income contributor. Unfortunately, HPE decided not to renew its lease. On 22 September 2017, HPE informed FCOT that it would vacating 178,843 square feet (out of 191,846 square feet) of its space at Alexandra Technopark upon expiry in September and November 2017. Likewise, HPS informed FCOT that it will only extend a portion of its lease by between 2-13 months from 1 December 2017.

Since 2013, Frasers Commercial Trust has delivered growth in gross revenue and distributable income to its unitholders after it reshuffled its portfolio. Moving ahead, FCOT looks ready to achieve long-term growth and deliver stable distributions to unitholders. In the short term, however, the REIT has to find a way to replace Hewlett-Packard’s vacating its lease as it accounts for substantial part of its revenue.