Hongkong Land Holdings Limited (SGX: H78) is a leading property investment, management and development group with strategic assets located in major cities across Asia. Hongkong Land has a standard listing on the London Stock Exchange with secondary listings in the Bermuda Stock Exchange and the Singapore Stock Exchange. As at 11 December 2017, Hongkong Land’s share price on the SGX is US$7.33.

In this article, I’ll bring a comprehensive account of Hongkong Land’s recent accomplishments over the last 10 years, the challenges it currently faces, and the pipeline of projects where it can potentially derive its future income from. Here are the 11 things you need to know about Hongkong Land before you invest.

1. Hongkong Land recorded US$900 million to US$1,000 million a year in sales from its property development activities over the last four years. It is an improvement from a three-year decline from 2009 to 2012 when property sales dropped from US$558.2 million to US$252.1 million.. The improvement is mainly contributed by sales derived from its development projects located in Chongqing, China. They include Yorkville South, Yorkville North, the Bamboo Grove, the New Bamboo Grove, Central Avenue, Landmark Riverside and WE City. Thus, property development has become the fastest growing division of Hongkong Land. 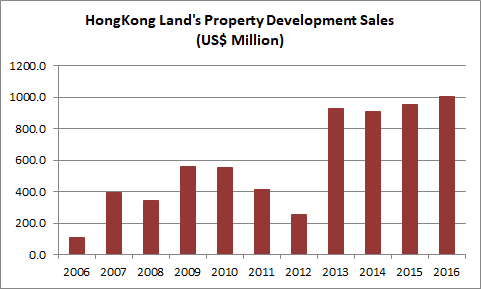 2. Hongkong Land owns and manages approximately 800,000 square metres of prime office and luxury retail properties located mainly in Hong Kong and Singapore. Over the last 10 years, the property investment division has achieved a CAGR of 9.4% in rental sales, from US$348.7 million in 2006 to US$858.8 million in 2016. This is attributed mainly to rental income derived from One Raffles Quay in 2007 and its 33% stake in the Marina Bay Financial Centre from 2010 onwards. 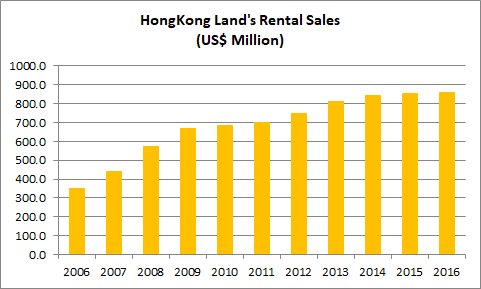 3. Overall, Hongkong Land has achieved a CAGR of 13.6% in group revenues over the last 10 years, from US$555.9 million in 2006 to US$1.99 billion in 2016. The growth is directly attributed to higher sales achieved from both property development activities and rental income from its investment properties during the period. 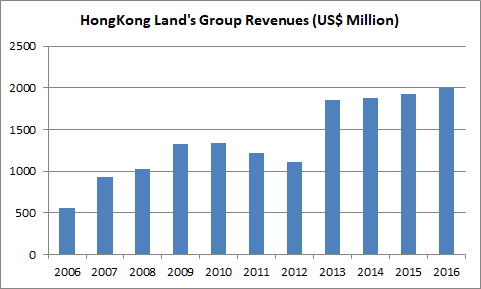 5. From 2007 to 2016, Hongkong Land generated US$5.14 billion in cash flows from operations. During the period, it also received US$1.05 billion in dividends from its investments in associate and joint venture companies and raised another US$656.7 million in net long-term debt. In turn, Hongkong Land has spent:

Hongkong Land has been using a combination of positive cash flows from operations, dividend income, and long-term borrowings to fund its property development activities in Chongqing, China and reward its shareholders with dividends. As at 30 June 2017, Hongkong Land has US$1.89 billion in cash reserves, a current ratio of 2.43, and a debt-to-equity ratio of 0.10. 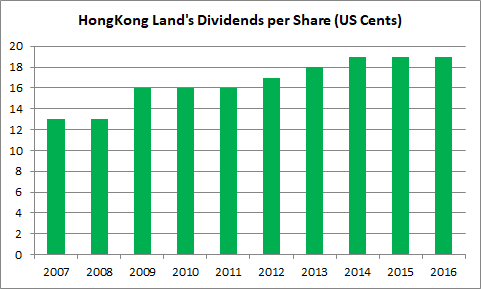 7. Invariably, Hongkong Land faces several risks which are inherent to the property industry:

8. Moving on, Hongkong Land’s property development division has a portfolio of 6.75 million square metres of total development area. Of this, 4.69 million square metres is currently either under construction or to be developed in the future. As at 30 June 2017, Hongkong Land has accumulated as much as US$1.42 billion and US$997 million in unrecognised property sales in China and Singapore respectively.

9. In the first half of 2017, Hongkong Land added four new projects into its development portfolio. This improves its income visibility over the mid-term. The four projects comprise:

10. On 12 June 2017, Hongkong Land and Malaysia-listed IOI Properties Group Bhd jointly announced the signing of a memorandum of agreement to develop and manage a parcel of prime land measuring 1.1 hectares known as Central Boulevard. It is located within the Marina Bay and Central Business District of Singapore. Presently, IOI Properties Group Bhd will hold a 67% stake of the proposed joint venture with the rest held by Hongkong Land.

11. Looking ahead, Hongkong Land is expecting to derive rental income from its new investment properties which include:

Hongkong Land has produced stable revenues and underlying profits, and delivered steady dividends to shareholders over the last 10 years.

Presently, approximately 76.5% of its assets are investment properties which will continue to contribute stable recurring income for Hongkong Land. In addition, it has built a pipeline of property development projects which would continue to improve its income visibility in the mid-term. It also has a relatively low-gearing ratio of 0.10 which gives it the option to borrow to finance future acquisitions and pursue joint venture opportunities whenever these they arise.

So, would Hongkong Land survive another 128 years from today? Time will tell. But for now, it is sufficient to say that Hongkong Land has built and maintained a legacy of strength, stability and resilience to ride through the market uncertainties of today.