Formed in 1960, Malayan Banking Berhad (Maybank) operates more than 2,400 branches across 20 countries including all 10 nations in Southeast Asia. Presently, it is the fourth largest banking group in Southeast Asia. As of 22 June 2018, Maybank is worth RM100.4 billion in market capitalization and is the only stock in Malaysia that has exceeded the RM100 billion mark.

In this article, I’ll bring a detailed account of Maybank’s past performance over the last 10 years and its outlook toward the near future. Therefore, here are the 12 things you need to know about Maybank before you invest. 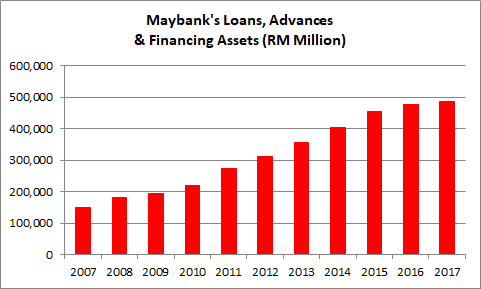 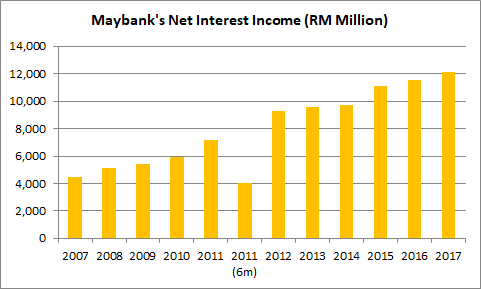 3. Maybank has also achieved consistent growth in non-interest income over the last 10 years. It has increased steadily from RM2.7 billion in 2007 to RM6.0 billion in 2017. The growth was mainly driven by Maybank’s Islamic Banking operations, and fees & commission-based income in the 10-year period. 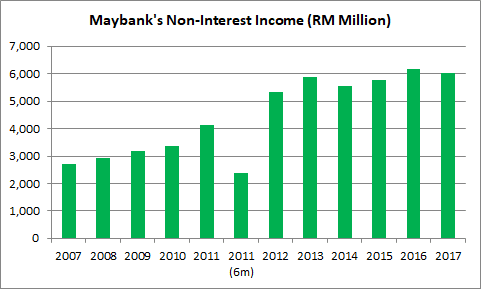 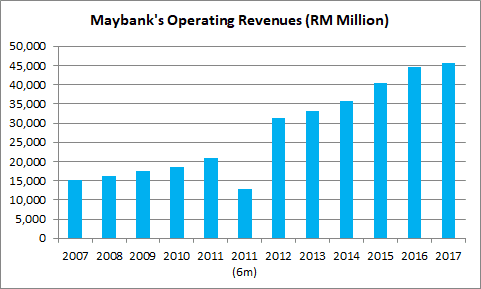 5. Maybank’s earnings are dependent on the amount of impairment losses incurred on its loans, advances, and financing assets. For instance: 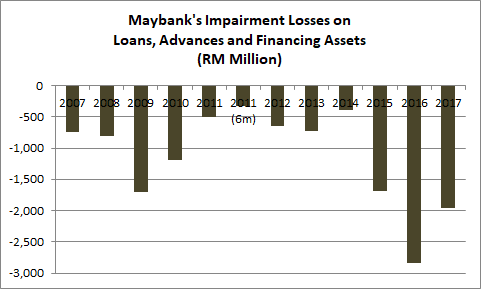 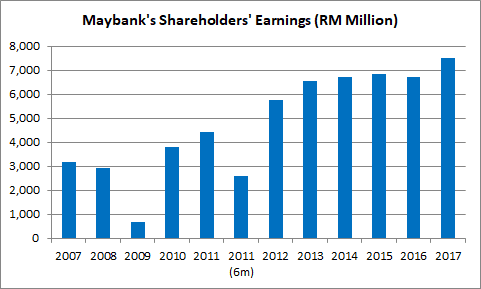 6. Maybank has reported continuous marginal decline in return on equity (ROE) since the financial year ended 31 December 2011. ROE dropped from 16.2% in 2011 to 10.9% in 2017. This is because Maybank’s growth in shareholders’ equity has surpassed its growth in shareholders’ earnings over the last five years. It is an effort of Maybank to be well-capitalized to meet the requirements of the implementation of Basel III in advance. 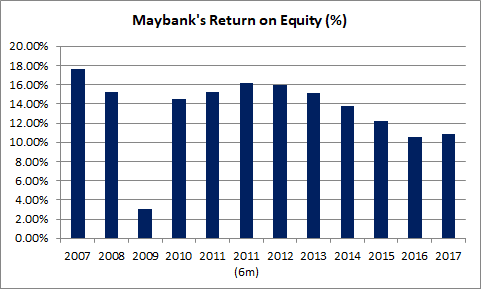 7. Maybank has huge fluctuations in net cash flows from operations. This is normal as banks have huge fluctuations in working capital. These include changes in customers’ deposits and changes in loans, advances and financing. As such, it is impossible to use the discounted cash flow method to estimate the intrinsic value of a bank stock. Excluding changes in working capital, I’ve discovered that Maybank has generated rising operating cash flows over the last 10 years. It increased from RM5.6 billion in 2008 to RM11.7 billion in 2017. In total, the total operating cash flows before working capital changes amounted to RM87.0 billion during the 10-year period. 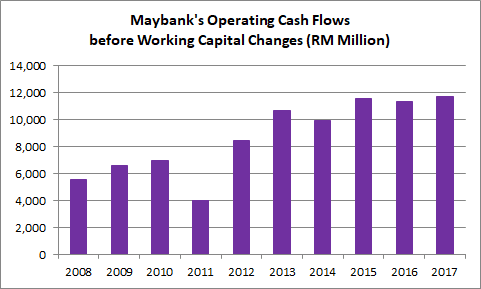 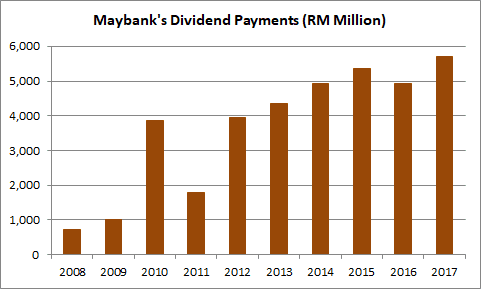 9. Maybank maintained a healthy liquidity coverage ratio (LCR) of 133% in 2017. It is above the minimum requirement of 80% set by Bank Negara Malaysia. LCR is used to assess a bank’s resilience to withstand an acute liquidity stress scenario over a 30-day horizon. It is calculated by dividing the amount of high-quality liquid assets (HQLA) with net cash outflows over a 30-day period. HQLA is defined as liquid assets that can be easily and immediately converted into cash at little or no loss of value. A high ratio indicates that a bank has adequate HQLA to meet liquidity requirements for the next 30 days under a significant stress scenario.

11. Maybank reported loan loss coverage of 71.5% in 2017, the lowest since 2008, and below the industry average of 82.9%. This means, in percentage terms, Maybank has set aside lower provisions to cover non-performing loans in comparison to most domestic banks in Malaysia in 2017. 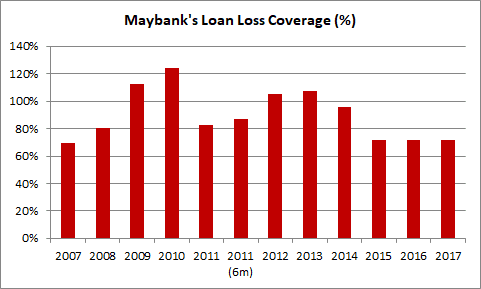 12. In the mid-term, Maybank has identified five strategic objectives under Maybank 2020. They include:

In summary, Maybank has built a steady track record of delivering growth in operating revenues and shareholders’ earnings over the last 10 years. The bank is now intensifying its efforts on going digital to remain relevant, maintain its costs, and to pursue new revenue streams in the near future. Moving ahead, it strives to further cement its position as one of the leading banking groups in Southeast Asia.