Charlie Munger is the business partner of Warren Buffett at Berkshire Hathaway. Although Munger doesn’t share as much of the spotlight as Buffett, his investment approach is said to have keenly influenced Buffett over the years.

Last year, I wrote an article on 8 timeless quotes from Warren Buffett on life, business and investing. This year, I’d like to share some more ageless quotes from the equally wise Charlie Munger. Hopefully, they can help you draw some inspiration as an investor… or even better, challenge the way you look at investing.

So here are, in my opinion, five timeless quotes (and a few more sprinkled in) from Charlie Munger that you can take away something valuable from:

This quote is the same as Buffett’s famous one and it’s no surprise here. The pair are the brains behind the success of Berkshire Hathaway, and it is exactly this approach that has brought them to where they are today. So if two of the greatest investing minds repeat the same thing, it would be unwise to ignore it.

Many value investors make the mistake of putting too much emphasis on the value of a stock, that you only buy a stock when it is significantly undervalued. This concept is based on Benjamin Graham’s approach of deep value investing where you look for cheap ‘cigar-butt’ stocks selling at a huge discount. Now don’t get me wrong, looking for value is important and you must have a margin of safety to account for errors in your analysis. But what comes before value is the quality of the business you are investing in.

For example, when Facebook first listed in its early years, its P/E ratio went as high as 100. Pure value investors would have said it was expensive and crazy to buy a stock at that valuation. But great companies tend to outperform their competition and consistently grow their earnings.

If we were to value Facebook at 33 times earnings then (which was the industry average), its intrinsic value would have been US$12.60 – a far cry from Facebook’s IPO price of US$38. If you had demanded a 50% margin of safety, Facebook would have needed to trade at US$6.30 for you to make a move. (The lowest Facebook ever went was around US$18 a few months after its listing.)

When it comes to long-term investing, don’t simply look for under-priced opportunities; look for quality in the company first. High-quality companies normally don’t come cheap, but if you can find them priced fairly or at a slight premium, I would still consider that a bargain.

2. ‘I don’t get to where I am going after mediocre opportunities.’

This quote re-emphasises Munger’s focus on buying great companies. You buy superior, quality companies because of the edge they have over their competitors. As long as their competitive advantages (i.e. economic moats) exist, they will dominate the market by winning more market share and growing their revenue. The wider the moat, the longer the company can stay ahead of its competition. In fact, great companies can even widen their moats as they grow, making it even harder for the rest of the playing field to catch up.

Take a look at Alphabet (Google’s parent company). Over the years, Google has been widening its moat with its search technology by serving users the most relevant search results in a blink of an eye. Google can even customise individual search results on based the user’s past browsing history.

I didn’t think so.

With the lion’s share of traffic going to Google, YouTube, etc., where do you think advertisers will want to spend their ad dollars on? Google or Bing? YouTube or Vimeo?

Because Google is able attract so many eyeballs and sell so much online advertising space, it generates billions and billions of dollars in revenue every year. (In FY2018, Google’s advertising revenue was US$116.1 billion.)

Now what do you think Google does with all this money?

It buys more online real estate and creates better, newer services. In 2004, Google acquired three companies that created the technologies that would eventually become Google Maps. In 2005, it acquired Android Inc. for US$50 million. It is now the most widely used mobile operating system in the world. In 2006, Google acquired YouTube for US$1.6 billion – one of the best tech deals of all time. At the same time, Google has continued to plough money and research into improving its search, email, browser technology and more so that people continually choose to use its services on a daily basis.

So take a look at your watchlist and portfolio. Are you looking out for great companies that you can hold onto for the next 10-20 years? Or are you making speculative bets on low-quality companies just so you can hopefully make a quick buck?

3. ‘The big money is not in the buying or the selling, but in the waiting.’

As a long-term investor, it is important to remember that your trading activity does not determine your overall returns. The type of company you invest in does.

When you invest in a great company and hold for the long term, you allow your wealth to grow in step with the fortunes of the company. Have a look at the returns of some of the greatest companies over the last 10 years:

One reason why investing in a great company, and simply waiting, can give you great returns is due to compound interest.

Notice how the amount grows exponentially the longer you wait. That’s the power of compound interest.

For Munger, investing is not about trading in and out of the market and making short-term bets. It’s about holding onto great companies that can give you compounded returns for a long time to come.

4. ‘Spend each day trying to be a little wiser than you were when you wake up.’

It doesn’t matter what your station is in life or where you’re headed to next, you can always grow and learn new skills and ideas. Growth can come from your job, from your relationships, and, yes, from investing as well.

Warren Buffett famously shunned technology stocks for the longest time saying that he doesn’t invest in businesses he doesn’t understand. And, granted, Berkshire Hathaway had done tremendously well for so many years without investing in tech.

I still remember back in my early days of investing (in 2011), a seminar I attended taught its students never to invest in technology stocks — simply because Warren Buffett never did. Frankly, I thought that was ignorance at best.

Buffett didn’t invest in tech because he didn’t understand tech — Buffett was simply staying within his circle of competence — not because technology companies were necessarily bad investments. If you had followed their advice, you would have missed out on the growth of companies like Apple, Alphabet, Amazon, Facebook, and Microsoft over the least 10 years.

The funny thing is Buffett and Munger invest in technology now. If you have a look at Berkshire’s stock portfolio, its largest holding is Apple Inc. Berkshire also owns stakes in Amazon and Verisign, the provider of Internet domain name registry services globally.

So if Warren Buffett, who is in his eighties, and Munger, who is in his nineties, can be flexible enough to learn about technology stocks and subsequently make Apple their largest holding in Berkshire, there’s really no reason why we can’t learn and grow as investors ourselves. Learn to question and challenge assumptions, and don’t make the mistake of rigidly sticking to others’ advice at face value.

5. ‘Success means being very patient but aggressive when it’s time.’

Besides sitting still, moving fast when the time is right is key to becoming a successful investor. And in order to move fast, you must have the capital ready to take advantage of any opportunity that arises.

‘A lot of opportunities in life tend to last a short while, due to some temporary inefficiency… For each of us, really good investment opportunities aren’t going to come along too often and won’t last too long, so you’ve got to be ready to act and have a prepared mind.’ – Charlie Munger

Many investors find it hard to simply hold onto cash and wait for the right opportunity. This is doubly true during a bull run as stock prices rise ever higher. Seeing other people make money in a buoyant market can cause anyone to have a serious case of FOMO – the fear of missing out. Because of this, some investors rush to invest and end up investing in weaker companies or overpriced stock.

However, the market will eventually correct itself and prices will start coming down, giving you the opportunity to pick up great companies at low valuations. The problem is… if you had rushed in earlier, your capital is now stuck in your earlier investments. If you sell now, you’d be making a huge loss. But if you don’t, you have less capital to deploy in the undervalued, high-quality companies that the market is now offering you. Will you be able to cut your losses then?

Instead of having to ever face this scenario, why not simply wait and conserve your capital, and build up a watchlist of great companies in the meantime? So when the opportunity arises, you will be ready.

I hope this article has maybe challenged the way you look at your portfolio from the perspective of what makes a company a great investment — it’s less about its price than the quality of its underlying business.

‘Over the long term, it’s hard for a stock to earn a much better return that the business which underlies it earns. If the business earns six percent on capital over forty years and you hold it for that forty years, you’re not going to make much different than a six percent return – even if you originally buy it at a huge discount. Conversely, if a business earns eighteen percent on capital over twenty or thirty years, even if you pay an expensive looking price, you’ll end up with one hell of a result.’ – Charlie Munger

Spend more time studying a company’s business model and its economic moats. Understand why it’s able to scale and outlast its competitors. Evaluate its track record and whether it can continue to dominate its industry in years to come. You only need to own a handful of truly great companies to do well in the stock market over the long term.

This has served me well and, hopefully, it will serve you well as an investor too. 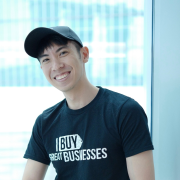 Kenji Tay is the chief marketing officer and a co-founder of The Fifth Person. Like many of us here, he's an avid long-term investor after being forced to listen to countless two-hour investment conversations between Victor and Rusmin at the dinner table. It kinda rubs off eventually.