Spirits is the largest revenue contributor accounting for 61.6% of total revenue.  Besides Thai spirit brands like Mekhong and Phraya, the company also carries international brands like Old Pulteney, Balblair and Spiced Pacific Rum. 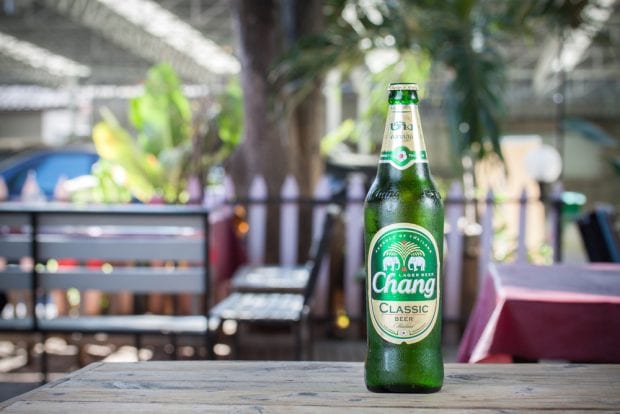 Non-Alcoholic Beverages is the company’s newest segment to the business after the part-acquisitions of Oishi, Sermsuk, and Fraser & Neave (F&N). This segment accounts for 9.6% of total revenue. Familiar brands include 100 Plus, Oishi green tea, F&N, Nutrisoy, Seasons, Magnolia milk, and Fruit Tree juice.

Now that you have an overall understanding of the business, let us now move on to the five things you need to know about Thai Beverage:

From the chart, you’ll notice that the 2008/09 recession did not affect ThaiBev’s revenue at all. People drink in good times and drink more in sorrow. Spirits and beer contribute the majority of ThaiBev’s revenue and alcohol can be addictive as well which pretty much explains why the company’s revenue rose even during the Great Recession. 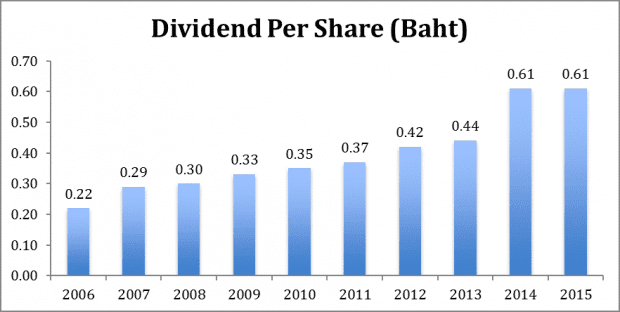 Since ThaiBev listed on the Singapore Exchange in 2006, it has been paying a growing dividend for the past ten years (one of our criteria for how to pick to great dividend stocks). Dividend per share increased from 0.22 baht in 2006 to 0.61 baht in 2015.  The rising dividend per share reflects the strong cash flow generation of ThaiBev.

The Thai government has been increasing the excise tax on alcohol over the last ten years hiking tax rates in 2007, 2008, 2009, 2012, 2013, and 2015. Every time the government increases the tax, ThaiBev has been able to pass down the cost to consumers reflecting its pricing power.

A tax hike may affect alcohol consumption at the start but consumers get use to the higher prices eventually. At the same time, ThaiBev has diversified into the non-alcoholic beverage segment with the acquisitions of Oishi, Sermsuk, and F&N in order to mitigate the excise tax hike issue. 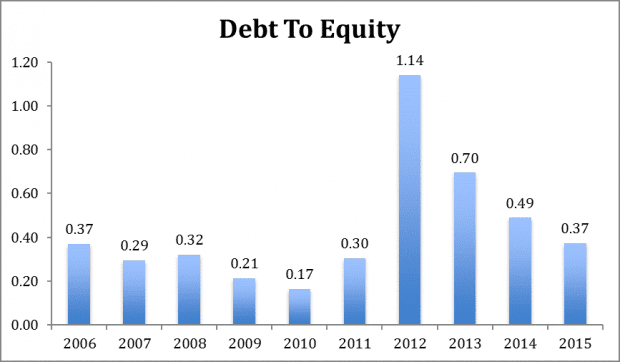 Coupled with strong cash flow generation, the company used the proceeds from the capital reduction to reduce their debt which is why the debt-to-equity ratio has fallen from 1.14 to 0.37 in 2015. A low debt-to-equity ratio is an important criterion in knowing how to pick a good stock.

F&N, Frasers Centrepoint Limited, SermSuk, and Oishi are public-listed companies on the Singapore and Thailand stock exchanges. ThaiBev owns sizeable stakes in all of them. The combined value of ThaiBev’s stakes in these four companies is S$3.1 billion.