The Significance of the Trans-Pacific Partnership

Singapore had always been seen as an economic miracle in the world. There are many indicators which we can use to prove this (like GDP per capita) but allow me to show you a different perspective:

Singapore has had no external debt since the fourth quarter of 1995 and continued to be this way over the next 20 years. This impressive track record can be attributed to our positive trade surplus. Our trade surplus for May 2015 alone was S$6.6 billion. This highlights the importance of trade to Singapore’s economy.

Singapore has always been actively pursuing free trade agreements (FTA) with major economies around the world. The next milestone FTA would be the Trans-Pacific Partnership or TPP as it is commonly referred to. The TPP would bridge both sides of the Pacific together through trade and cover 40% of the global economy. This landmark regional agreement would involve Australia, Brunei Darussalam, Canada, Chile, Japan, Malaysia, Mexico, New Zealand, Peru, Singapore, Vietnam and the United States.

This would cover 1/3 of world trade and entrench Singapore’s trade links with the rest of the world. The TPP is seen as pushing the boundaries of trade agreement standards and it would not be just about lifting tariffs to trade. It would also address next-generation issues such as the ability of corporations to sue governments in international tribunals, common standards for international trade practices, and the further opening up of protected industries such as agriculture to foreign competition. The TPP is also seen as giving substance to President Obama’s “Pivot to Asia” foreign policy and to act as an economic counterweight to China.

While Sir Stanford Raffles founded Singapore as free port of call back in 1819 and raised the British Union Jack in Singapore, the more contemporary liberalizing of trading standards can be traced to the midnight golf summit between Singapore’s then Prime Minister Goh Chok Tong and then US President Bill Clinton back in 2000. Both heads of state played golf for three hours and sowed the seeds for the U.S.-Singapore free trade agreement (USSFTA). President Clinton started the trade negotiations even as he was on his way out of office and the Bush administration carried on the negotiations.

It had to gain approval from the U.S. Congress and Senate before the USSFTA could come to pass. The agreement eventually came into fruition on 6 May 2003 when Prime Minister Goh Chok Tong and President George W. Bush signed the agreement. This historic event was done in the White House before global audiences. 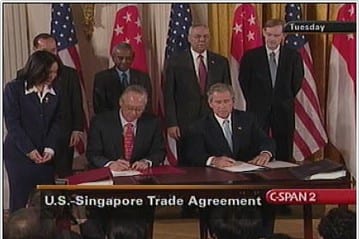 According to our current Prime Minister Lee Hsien Loong in 2014, the USSFTA increased trade and investments from iPhones to oil rigs substantially. Jobs were also created as a result. One of the notable successes after the USSFTA was the China-Singapore FTA which was signed on 23 October 2008 and went into force in January 2009.

This is notable because China is the third largest export market for Singapore with 10.7% of market share in 2014 and this excludes Hong Kong’s share of 10.9%. The U.S. is at a significant 5.5% in fifth place. The existence of the FTA allows our exports of machinery & equipment and refined petroleum products to find ready customers in these markets.

The success of the USSFTA spurred other countries to follow in Singapore’s footstep. The TPP started with just the four nations of Singapore, Brunei, New Zealand and Chile in 2003. It has now evolved into the premier FTA in the world with 12 nations. In other words, the roots of this ambitious TPP project had its humble origins in the USSFTA.

US Political Difficulty in Passing TPP

The largest player in the TPP would obviously be the United States. President Obama is keen to push through the TPP within his term in office and cement his legacy after Obamacare and as the first black U.S. President. However this has met with tremendous resistance in the United States especially from trade unions such as AFL-CIO. These trade unions are aligned with influential Democrats in the president’s own party which made progress through the U.S. Congress and Senate especially difficult.

These trade unions are afraid that further liberalization of the U.S. economy would lead to job losses for Americans. The North American FTA (NAFTA) opened the markets between Canada, Mexico, and the United States on 1 January 1994. NAFTA was blamed for massive job losses in the United States which allowed Mexicans and Canadians to work in the U.S. In addition, cheaper imports from Mexico disrupted and made obsolete low value-added industries in the U.S.

This issued was resolved with the Trade Adjustment Assistance legislation which give greater benefits for workers who were negatively affected. Workers would receive allowances when they attended re-training if their jobs were replaced by imports. This extended the trade act of 1974 according to the US Department of Labour. This was seen as a necessary price for the TPP to pass through Senate.

On 24 June 2015, the U.S. Senate gave President Obama trade promotion authority with a 60-38 vote that will give him the power to negotiate the trade deal with the 11 countries involved for six years. Once the final deal is secured, the legislative branch can either vote to pass or drop it. They cannot change the contents of the agreement which made proper negotiations possible. The contents of the TPP negotiations are considered state secret so we can only see it once it is made public 60 days before the U.S. Congress and Senate are set to vote on it. This trade pact could easily drag beyond the current Obama administration but it is in Obama’s interest to get it done before January 2017.

If you need an example of how the free trade agreement has changed our lives in Singapore, consider Citibank. Due to the USSFTA which is concluded in May 2003, Citibank was granted the Qualifying Full Bank License in 2004 which allowed it to expand rapidly. Today Citibank is a widely-recognized banking brand in Singapore compared to the State Bank of India. Both are top banks in their respective countries but each has a different value perception in Singapore.

While the TPP has not yet come into realization yet, it is clear that it is coming to our shores within the next two years. There will be winners and losers when the TPP comes into effect and Singaporean companies will have to adapt to their new trade and business environment. Companies that can adjust well post-TPP will thrive and grab market share from those who cannot adapt. It is not unimaginable for entire industries to be obsoleted which happened to labour-intensive industries like furniture making in the 1970s and other manufacturing operations over the years.

Singapore is also developing itself as an international commercial arbitration centre which would benefit from the inevitable increase in disputes as trade becomes more international. The passage of the TPP would enhance Singapore’s role in this area and be bullish for its various service providers.

While the TPP still has a few roadblocks to navigate, the landmark agreement would increase trade and cooperation among all 12 nations involved in the deal. With increased global trade flowing through Singapore and the ensuing economic growth it brings, it bodes well for our nation that just celebrated fifty years of independence and was founded on the principle of free trade nearly two centuries ago.