This is our first time attending Top Glove’s annual general meeting. Even though we arrived late at 9:45 a.m., we were surprised to still see long lines of shareholders queuing up to register for the AGM. When it came to our turn, all the meal vouchers were out as the management did not expect such a huge turnout for the AGM. We noticed that many Top Glove shareholders were serious investors and stayed on for the meeting even though no more meal vouchers were given out (unlike many other AGMs we attended in Malaysia where shareholders only came for the freebies).

1. Top Glove recorded an all-time high revenue of RM3.4 billion in 2017 – an 18% increase from RM2.9 billion in 2016. This was mainly contributed by the substantial growth in nitrile and TPE/CPE glove sales (18% and 19% respectively) and a stronger U.S. dollar (leading to more exports). Nitrile gloves now comprise 36% of sales while latex powdered gloves fell to 32%. Although revenue reached a record high, Top Glove’s profit after tax fell 9.4% from RM362.4 million to RM328.4 million due to higher raw material prices. 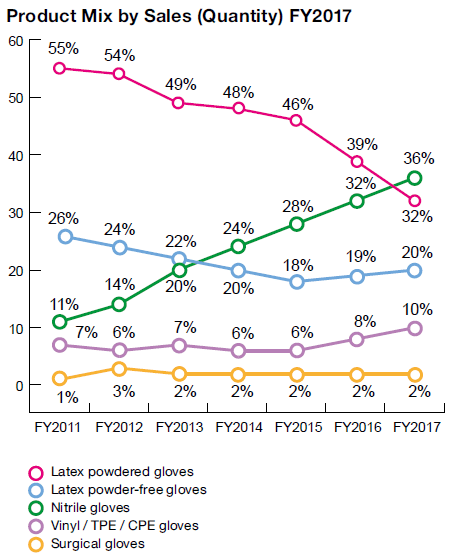 2. North America accounted for 31% of revenue, followed by Europe at 28% and Asia at 20%. Top Glove intends to penetrate further in emerging markets like Latin America, the Middle East and Africa and sees the potential for promising growth there. The management is optimistic that the global demand of for gloves will grow at 8% annually which is more than the current growth of the industry’s manufacturing capacity. 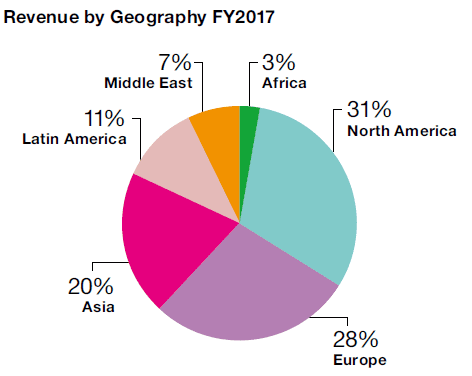 3. Top Glove declared a dividend per share of 14.5 sen in 2017, equivalent to a 55% dividend payout ratio. The company has a policy to distribute at least 50% of its profit after tax and minority interests. Since it listed in 2001, Top Glove has paid out a total of RM1,053.9 million in dividends.

4. A shareholder asked how China’s intention to cut excess industrial capacity would affect Top Glove’s expansion in the country. The management explained that China currently accounts for 5% of total revenue and the disruption may benefit Top Glove’s international exports as its Chinese competitors scale down production. Domestic demand in China may also rise due to a decrease in supply of gloves.

5. The management highlighted that Top Glove’s inventory turnover days and trade receivables turnaround are the lowest in the industry at 34 and 45 days respectively. The management is also working towards maintaining a low net working capital turnaround of 33 days.

6. The management sees a growing demand for nitrile gloves and plans to open two new factories that will produce 7.8 billion nitrile gloves annually. Factory 31 (with 30 production lines) is expected to be ready in May 2018 and Factory 32 (48 lines) will commence operations in December 2018. Top Glove currently has 550 production lines in 29 factories that can produce 51.9 billion gloves a year.

7. Top Glove’s R&D and engineering teams also work to continually improve the company’s production efficiency. For example, China’s gas prices may increase up to 200% and the teams are investing in newer heating systems to lower the use of gas. The company is also reducing its reliance on manual labour and implementing automation throughout the manufacturing process in stages.

8. Top Glove is looking at acquisitions to speed up its expansion. The management prefers to acquire existing factories as it is easier and faster for them to convert them into glove factories, rather than building the factory from the scratch. For example, Top Glove acquired two latex glove factories in Nilai and Muar in June 2017. The company also plans to acquire three more factories when it confirmed a deal in January 2018 to purchase Aspion, one of the largest surgical glove producers, for RM1.37 billion.

9. A shareholder wanted to know more about the CAPEX and revenue contributions from Top Glove’s condom and ambulatory care centre businesses.

10. Top Glove is aiming for 15% annual growth and grow 30 times in size to become a Fortune 500 company in the future. Right now, the company is ranked no. 40 in Malaysia and aims to hit top 20 by end 2018. The management shared that Top Glove won numerous awards in 2017 including ‘Highest Growth in Profit After Tax Over Three Years’ at The Edge Billion Ringgit Club Awards and ‘Best Companies to Work for in Asia’ at the HR Asia Awards. The CEO quoted Sir Alex Ferguson, ex-manager of Manchester United — ‘Every game that we play, we are expected to win’ — to reflect the winning philosophy to be upheld by management as they work to achieve the target of becoming a Fortune 500 company.