Malaysia is blessed with an abundance in oil and natural gas. In 1974, Petroliam Nasional Berhad (Petronas) was established as the national custodian for the oil and gas resources in Malaysia. Since then, Petronas has grown into a multinational integrated oil and gas corporation with operations in 50 countries worldwide. In 2016, Petronas was ranked the 125th largest corporation (by revenue) on the Fortune Global 500.

Presently, Petronas is a major direct shareholder of five companies listed on Bursa Malaysia. Individually, these five companies are worth in excess of RM5 billion in market capitalization. One of them is Petronas Gas Berhad (Bursa: 6033). Today, Petronas Gas is the leading gas infrastructure and utilities company in Malaysia. It processes Petronas’s natural gas piped from offshore fields and transports them to its customers in Malaysia and Singapore via its Peninsular Gas Utilization (PGU) pipeline network. Here, I’ll write 12 things you need to know about Petronas Gas Berhad before investing:

1. Petronas Gas has six gas processing plants in Terengganu. Combined, it is capable of processing over 2,000 million standard cubic feet per day (MMSCFD) of raw gas from offshore Terengganu into sales gas and other by-products such as ethane, propane and butane. It receives gas processing fees comprising mainly of fixed reservation charges under the 20-year gas processing agreement with Petronas. The gas processing division has maintained sales at around RM1.5 billion a year. However, it has incurred higher repair and maintenance expenses. Thus, gross profits have dropped from RM768.7 million in 2012 to RM648.4 million in 2016. 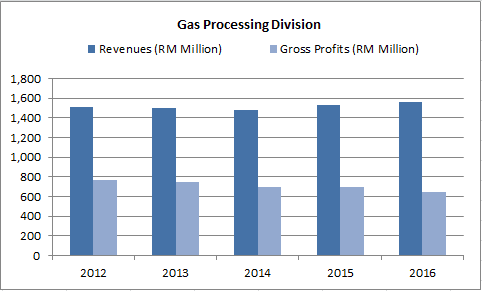 2. Petronas Gas manages more than 2,500 kilometres of pipeline across Malaysia. Known as the PGU pipeline network, it can transport up to 3,000 MMSCFD of sales gas. The sales gas is transported from its gas processing plants and liquefied natural gas (LNG) regasification terminal, and delivered to customers such as Tenaga Nasional, Senoko Energy, Keppel Gas, Gas Malaysia, independent power producers, petrochemical plants and other large industrial customers. This division receives gas transportation fees under the 20-year gas transportation agreement with Petronas. Presently, the gas transportation division is the largest income contributor to Petronas Gas. Revenues have gradually increased from RM1.1 billion in 2012 to RM1.3 billion in 2016. This has contributed to higher gross profits, up from RM839.3 million to RM975.3 million. 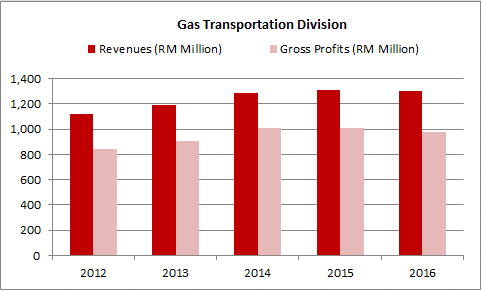 3. Petronas Gas Bhd has two utility complexes, Utilities Kertih (UK) and Utilities Gebeng (UG). They supply electricity, steam, industrial gases, and other by-products to customers at the Kertih Integrated Petrochemical Complex in Terengganu and at the Gebeng Industrial Area in Pahang. Over the last five years, the utilities division has maintained gross profits at RM150-160 million a year. 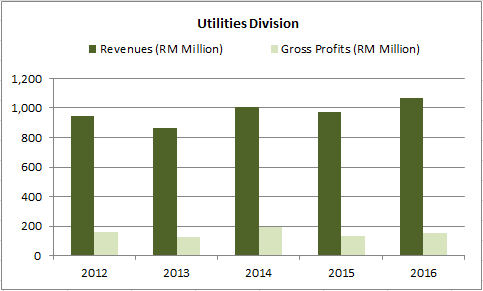 4. Petronas Gas commenced operations of its offshore LNG regasification terminal in Sungai Udang, Melaka in the second quarter of 2013. Thus, it is the newest division to Petronas Gas. The terminal receives vessels which carry imported LNG. It stores the LNG in two floating storage units and converts them into sales gas. The sales gas is then injected into the PGU pipeline network to be distributed to customers. The regasification division receives income from the 20-year regasification service agreement. Since 2014, this division has made RM600-650 million in sales a year. Gross profits have dipped marginally from RM308.0 million in 2014 to RM286.3 million in 2016 as a result of higher operating expenses. 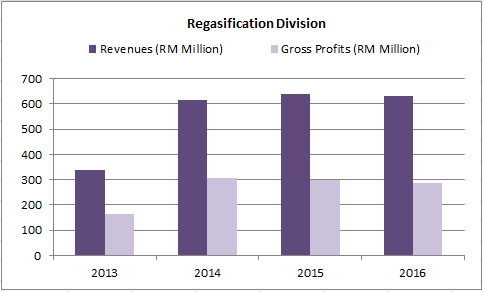 5. Petronas Gas has achieved a CAGR of 4.34% in group revenues over the last 10 years. It has increased from RM2.98 billion in 2007 to RM4.56 billion in 2016. This is mainly due to the expansion of the PGU pipeline network and additional sales from its newly established LNG regasification division over the 10-year period. 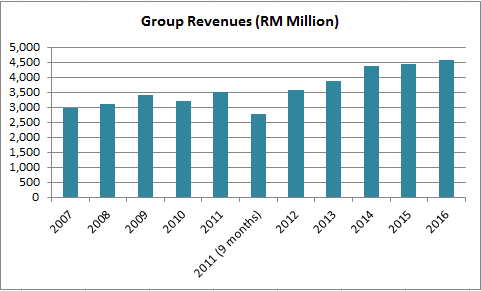 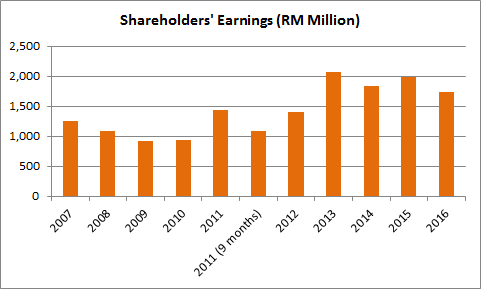 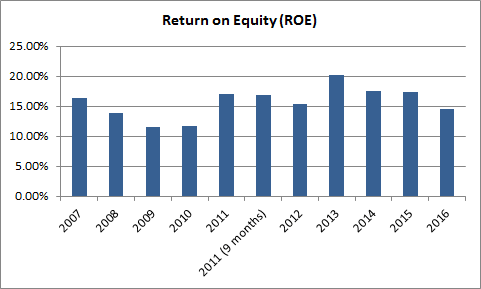 It’s clear to see that the company’s operations generate positive cash flow. As a result, Petronas Gas has steadily increased its cash reserves from RM879.7 million in 2007 to RM1.76 billion in 2016. 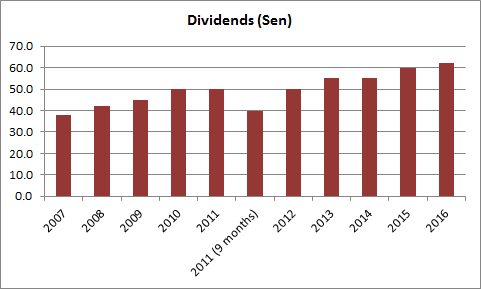 There are several key highlights that will affect the future performance of Petronas Gas. They include:

10. The first term of Petronas Gas’s 20-year gas processing agreement and gas transportation agreement with Petronas will expire on 31 December 2018. The length of the entire agreement is effective from 1 April 2014 to 31 December 2033. The remuneration terms, however, are revised prior to the expiry of each term as follows:

11. The LNG regasification terminal in Pengerang, Johor is 75% completed as at 31 December 2016. This project is jointly developed with Dialog LNG and State Secretary, Johor (Incorporated). Petronas Gas owns 65% of this facility. Costing RM2.7 billion to build, it has a capacity of 490 MMSCF and is scheduled to be commissioned at the end of 2017. This will enlarge the company’s LNG regasification capacity from 530 MMSCF presently to 1,020 MMSCF.

12. Petronas Gas is setting up an air separation unit plant in Pengerang, Johor. It formed a joint venture company – Pengerang Gas Solutions – with Linde Malaysia to undertake the development. Petronas Gas has a 51% interest in the project with the remaining 49% owned by Linde Malaysia. The total project will cost US$172 million and is scheduled to be commissioned in the fourth quarter of 2018. Upon completion, the plant is anticipated to have the capacity to generate 1,600 tons of oxygen per day and 1,800 tons of nitrogen per day respectively.

In conclusion, Petronas Gas has delivered steady growth in revenues, profits, and dividend payouts over the last 10 years. This is despite being involved in an oil and gas sector which is relatively volatile. Based on its latest Q1 2017 report, the trend looks set to continue as Petronas Gas saw its first quarter net profit soar by more than 100% year on year. But the management has said they continue to maintain a conservative outlook for 2017 due to as supply and demand imbalances have been slow to return to equilibrium.

Related: 13 things you need to know about Petronas Chemical Group before you invest