The recent sharp decline of the Malaysian Ringgit (MYR) caught the attention of many Singaporeans especially after it fell below RM3 against the Singapore dollar (SGD) on 24 August 2015. It eventually reached a record low of 3.04 to 1 SGD. 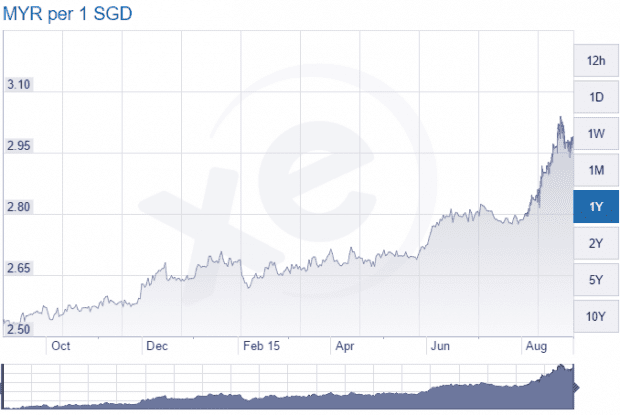 The MYR has gradually declined over 20% against the SGD over the last year but fell drastically by 9.5% in just the past month. Let’s look at the confluence of factors that led to the Ringgit’s quick decline over the past month:

Malaysia attracted controversy internationally when the Malaysian sovereign state fund, 1 Malaysian Development Berhad (1MDB), revealed that the fund lost RM665 million for its fiscal year ending 31 March 2014 and has over US$11 billion in debt.

The true scandal hit when US$700 million in prime minister Najib Razak’s personal accounts was linked to 1MDB. His defence that the money was a legitimate political donation from unnamed donors is highly questionable. Malaysia’s anti-corruption body cleared Najib of any wrongdoing but did not disclose further details and the controversy has been highly damaging to the legitimacy of the Malaysian government.

Deputy prime minister Muhyiddin Yassin criticized Najib publicly and warned of electoral defeat at an UMNO gathering on 26 July 2015. Two days later, Najib responded with a cabinet reshuffle which fired Yassin and chief investigator of the scandal, attorney general Abdul Gani Patail. Following this, foreign investors voted with their feet and exited their Malaysian investments which caused the MYR to plummet on fears of long-term political instability.

In addition to the 1MDB scandal, there is also the more immediate issue of Malaysia’s fiscal deficit. According to the IMF, Malaysia has constantly ran a budget deficit since 1998 in a reversal of its fiscal surplus policy for most of the 1990s. For the past 18 years, Malaysia has had to borrow money from capital markets to finance its expenditure.

To Malaysia’s credit, it has consistently lowered its fiscal deficit since 2010, however this has been aided by rising oil prices which accounts for 30% of annual state revenue. The current decline in oil prices could have a wide range of fiscal implications.

The key question is how wide will the fiscal deficit be this year? As state revenue is expected to contract, can state expenditure follow accordingly? 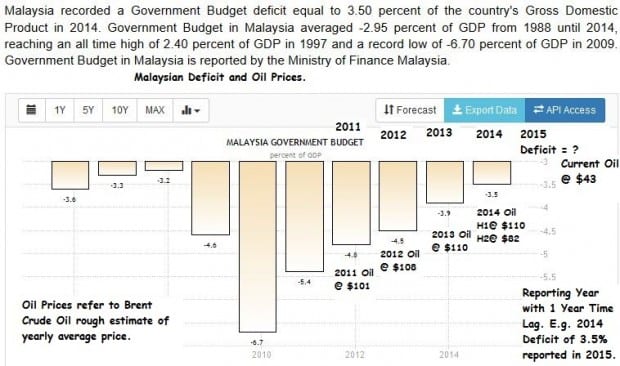 As we can see, Malaysia’s fiscal deficit has gone down as oil prices rose steadily over the past four years. Although oil prices weakened in the second half of 2014, its impact was mitigated as oil prices tend to be locked up for months ahead. 2015 will be a full year where oil prices are below $100 per barrel and it is currently only at $43. The impact of low energy prices would be felt fully this year and Malaysia is widely seen to exceed its target of 3.2% deficit.

Next, while Malaysia has steadily reduced its budget deficit, its external debt continues to rise.

A smaller budget deficit does not equate to reduced debt. Malaysia may borrow less money but it existing debt still remains and it also incurs interest charges. Malaysia would need to run a fiscal surplus to pay down its debt. Notable bond investors such as PineBridge Investments has reduced its Malaysian debt holdings recently in the face of the weakening Ringgit and economy.

International investors have not forgotten the sudden capital controls then-prime minister Mahathir Mohamad imposed in September 1998 when the MYR dropped below 4 against the U.S. dollar (the Ringgit is trading at 4.23 to 1 U.S. dollar as of now).

The currency peg of 3.8MYR to 1USD remained from 1998 to 2005 before it was lifted. Investors were not allowed to withdraw their MYR for a year and many institutional investors would want to avoid such a circumstance happening again. This is why investors are selling their Malaysian assets despite prime minister Najib’s assurances that there will be no capital controls.

The point about capital controls (or the dissolution of them) is that it can happen without prior warning. The sudden unpegging of the Swiss franc in January this year and the recent China yuan devaluation are prime examples.

Another reason to beware of capital controls is that Malaysia’s reserves have dropped to $96.7 billion as of July 31. This decline is attributed to low oil prices and also efforts by its central bank to defend its currency unsuccessfully.

The yuan devaluation has also hurt the Ringgit and further yuan devaluations could happen in the future if China struggles to regain its economic footing. The Malaysian authorities may be reluctant to impose capital controls now but when the reserves are empty, they might have no choice but to do so. Institutional investors understand this and that is why some are selling their Malaysian-based assets now and this sell-off also depreciates the Ringgit further.

Many Singaporeans might be delighted over the weak MYR because their weekend shopping trips to neighbouring Johor are now cheaper. However a weak Malaysian economy is bad news for Singapore as our closest neighbour is also our largest trading partner. Our weekend trip to Johor would also be a lot less pleasurable when crimes rates go up in times of economic desperation. A richer Malaysia is better for a richer Singapore.

As Malaysia’s economy stalls and the Ringgit weakens, investor confidence in Malaysia will continue to fall. Sudden capital controls like in 1998 cannot be ruled out and investors are slowly leaving the country for now.

As an investor yourself, it’s time to take note of your Malaysian stock or property investments (if any). A falling Ringgit against your local currency will only mean that any returns will be cut by the unfavourable foreign exchange movement. For example, if your Malaysian stock returned 15% but the Ringgit falls by 10% against your local currency, your actual returns would only be 5%.

In the meantime, Malaysia’s problems are deep rooted and will not be solved easily.