There is always a major macroeconomic theme for every period of time and we can utilize that to boost our investment returns. This is because if we get it right, our potential returns can be substantial as we ride with the wave. Having said that, I would propose that the major economic theme for this year is the turnaround of oil and gas prices.

You can also reference my previous article in February “How to Cope With Higher Inflation and Falling Wages in Singapore” where I justified my outlook on higher inflation on the recovery of oil prices then which has since panned out.

Oil prices made a U-turn in March due to the breakthrough of US negotiations with Iran over nuclear sanctions which opened the possibility of new oil supplies. Oil prices went back up because the market recognized that there will be a significant time lag before the actual removal of sanctions allow for Iranian oil to flow into the market. This is not expected before year 2016 at the earliest.

This weekly chart of Brent Crude Oil illustrates this theme:

The price decline from June 2014 all the way to January 2015 was brutal as if someone jumped off the cliff. Let’s look at some numbers to get a sense of the decline.

This decline was due to an oversupply of oil in the face of relatively constant global demand. The primary source of this oversupply of oil comes from the discovery of horizontal drilling or more commonly known “fracking” in 2005 and the mass commercialization of this new technology in 2012 in the United States. Banks were happy to grant new loans and record number of new oil exploration companies were drilling for oil in previously inaccessible areas. This phenomenon peaked last year and production dropped as noted in my previous article in response to falling oil prices.

As seen in the chart above, the turning point of oil prices in mid-March has led to the continuation of higher oil prices in the market. Significant market observers such as the President of the New York Federal Reserve William Dudley agreed that this period of low energy prices is likely to be over. He made the following comments in a recent speech on 06 April 2015 in New Jersey:

“In particular, most of the impact from the decline in energy prices that has weighed down overall inflation is likely over.”

This is the lowest weekly increase in commercial crude oil inventory in 13 consecutive weeks. This will add fuel to the fire of higher oil prices going forward.

Turning our attention back to Singapore, while we are currently in a mild deflationary environment, this would not last long. In fact, most of us might not actively feel the effect of mild deflation in our daily lives. This is because businesses don’t pass on the price changes immediately and they will try to absorb the prices changes as it can be disruptive to change prices too frequently.

So while your cab fare will not change as their cost pressures go up, the company’s margin actually do go down. This is reflected in their share prices as astute investors price them accordingly. One of the better ways to ride this increase in oil prices is to look for companies that service these oil companies. Luckily for us, Singapore is a major oil refining centre even if we do not produce a single drop of oil here.

According to the Economic Development Board, Singapore is the undisputed oil hub for Asia and we are one of the top three oil export refining centres in the world with 68.1 million tonnes in 2007. The oil industry accounts for 5% of our gross domestic product (GDP). Hence there is plenty of companies that would benefit from this turnaround in energy prices.

For example, in my previous February article, I brought the stock of Ezion to attention of readers. Ezion services the offshore oil and gas industry in the oil rig segment. Ezion managed to maintain its pricing power during this challenging period when its clients embarked on cost-saving initiatives. That speaks of the value of its product and services.

However today, I would like to bring to your attention another worthy candidate to add to your portfolio. Keppel Corp is a leader in the oil and gas industry in Singapore. The biggest difference between Ezion and Keppel is that the latter is a conglomerate which expanded into property (Keppel REIT) in addition to its offshore & marine division and also to its oil & gas infrastructure division. Keppel also has significant investments in Kris Energy which is an independent upstream exploration company (meaning to say that their business is to search for oil and this is a volatile business to say the least) and also in the telco company M1.

Unjustified Fall in Share Price Due to Oil Prices

Hence Keppel provides diversification but it has also been badly hurt in the oil price plunge as it is still heavily exposed to the oil and gas industry through its offshore & marine division and its oil & gas infrastructure division. We can see this from the source of its revenue according to division for its financial year of 2014 as extracted from its website below.

Keppel derived $8,556 million or 64.4% of its total revenue of $13,283 million from its offshore & marine division making it the prime source of its revenue. This is followed by $2,933 million or 22.1% from the infrastructure division. In other words, Keppel derives a significant 86.5% of its revenue from the oil and gas segment. 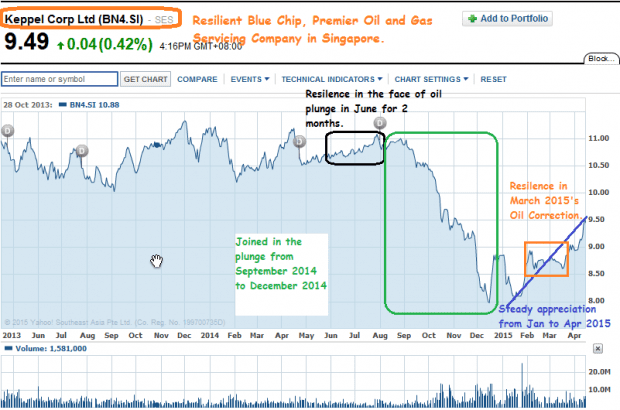 The impressive quality of Keppel’s share price is its resilience as seen in the chart above. The price of oil plunged sharply in June 2014 but Keppel’s share price only joined in the plunge in August 2014. This is a full three-month delay. You may say that this is only because the market was waiting for its 31 July 2014 dividend of $0.12 per share.

However it held for the full month of August and only fell sharply on 3 September 2014. In a more recent example, while oil prices were making a correction in March, Keppel’s share held steady during this period as seen in the orange box above.

This is a stellar example of its quality. Last to fall but first to rise. In addition, we can see that its share price is making an impressive upward climb back to the $11 as seen in August 2014 from its trough of $8. Of course there will be volatility in its share price and this will be nerve racking for the speculator. For the investor, the plunge from September to December 2014 provides a good 27% discount for a premier blue chip company based on a transitory market condition that is on its way to correct itself.

Keppel Corp’s business is likely to grow stronger after this challenging period weeds out weaker competitors. The status of Singapore’s oil hub is not going to change overnight and in fact it is going to grow stronger as Singapore is an integral part of Asia economically.

Singapore is still a strategic port in Asia. As the rest of Asean develops, they are going to have an unquenchable thirst for energy along with the necessary energy infrastructure needed to facilitate their growth. More people are going to move from the countryside to the city and Keppel Corp is going to be there to build its power plants and other infrastructure needs. Oil discovered and drilled near the coast of the Indonesian islands would fill its order backlogs for offshore marine products and services. Keppel Corp’s stellar reputation built since 1968 position puts it as the premier organization for its clients.

Keppel Corp is not going to go away anytime soon. Also you can observe that Keppel’s revenue and profits rose last year in this challenging economic conditions. The only blip is in its infrastructure division’s revenue but they made it up by its profit. Its offshore and marine division remained strong.

This would mean that the share price drop is due to unfounded investor’s worry about Keppel’s future direction. Perhaps it seemed rational in Q42014 but Keppel’s financial statements have proven them wrong. In other words, there are some investors who made a costly mistake in their decision. That is the likely reason why Keppel remained resilient in March 2015. No rational investor would want to squander their hard-earned money on unfounded fears that a speculator might do in his search for short-term profit by focusing on short-term price movements.

Keppel Corp’s market capitalization is around $16 billion based on today’s price and Temasek is the major shareholder with around 20% ownership. Temasek’s ownership means that Keppel is likely to be well governed without the Enron type fraud festering inside. Even if you are skeptical about Temasek’s stake as Keppel Corp is a government linked company, look at the significant stakes of Aberdeen and BlackRock.

These noted asset managers owe their loyalty not to Singapore but to their shareholders. Aberdeen hails from Scotland while BlackRock has its headquarters in the United States. They will not purchase such significant shares in Keppel Corp unless it has solid fundamentals for future sustained growth. The rest of the list are all noted players in the investment community. In addition, Keppel Corp is also a member of the Straits Times Index.

While I’ve painted the solid credentials of Keppel Corp and why I think it’s a good long-term investment, always remember to do your own due diligence and invest only if the stock suits your portfolio and meets your individual investment goals. If you decide to add Keppel Corp to your list of portfolio holdings, look to buy and hold long term instead of speculating on its price. After all, investing is a marathon and not a short-term sprint.