Fraser & Neave, Limited (F&N) (SGX: F99) is among the oldest companies in Southeast Asia. Its roots can be traced back to 1883. In that year, John Fraser and David Chalmers Neave formed the Singapore and Straits Aerated Water Company to venture into the aerated water business. It was also to diversify from their printing business under the Singapore and Straits Printing Office. Years later, in 1898, the two partners formed a new public company known as Fraser & Neave, Limited. The two businesses were then sold to their newly-formed company.

In the 1930s, F&N had started to be more active in the food & beverage manufacturing industry. In 1931, it formed a joint venture with Heineken N.V. to set up Malayan Breweries Limited which is now known as Heineken Asia Pacific. In 1936, it acquired franchise rights to Coca-Cola. Subsequently, it acquired franchise rights to Pepsi, 7-Up, and Fanta. Since then, F&N has inked numerous major corporate milestones, including the pioneering of condensed sweetened milk in 1959 and the launch of 100PLUS isotonic drink in 1983.

In 1996, Fraser & Neave Holdings Berhad (F&NHB) (Bursa: 3689) was formed following the restructuring of the Group’s Malaysian soft drinks, dairies and glass businesses. (The glass business was subsequently divested in 2010.)

Today, F&NHB is a leading F&B manufacturer in Malaysia with significant presence in Thailand. It has built a portfolio of 24 household brands such as 100Plus, F&N, Carnation, Seasons, and Gold Coin. As I write, F&NHB is worth around RM9.0 billion in market capitalization.

In this article, I’ll bring a detailed account of F&NHB’s tremendous success over the last 10 years, the challenges it currently faces, and its developments to sustain future growth. 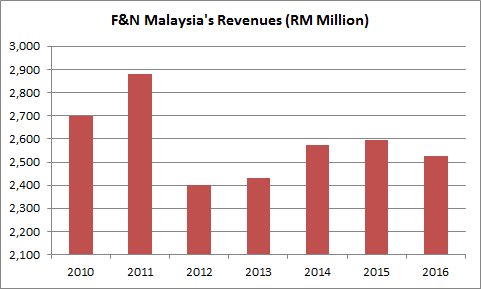 2. F&N’s operations in Thailand is a key growth driver for F&NHB. In 2009, F&N Thailand built a RM250 million dairy plant at the Rojana Industrial Estate. This plant can produce up to 3.5 million cans a day, thus, making it the largest in the region. In 2012, F&N Thailand was hit by floods which caused a 200-day cessation on its manufacturing activities. F&N Thailand revenues declined from RM975.0 million in 2011 to RM770.6 million that year. Since then, F&N Thailand has recovered and expanded its exports to Cambodia, Myanmar, Laos, and Vietnam. This has seen revenues grow from RM770.6 million in 2012 to RM1.64 billion in 2016. 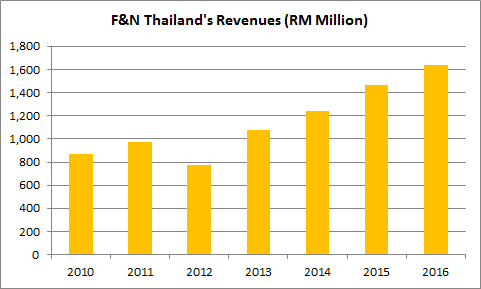 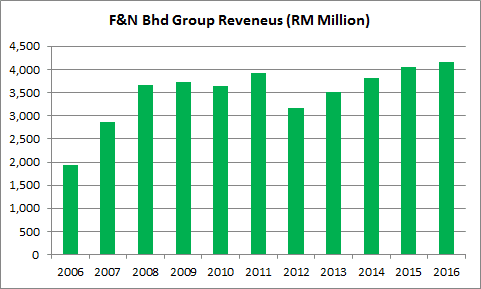 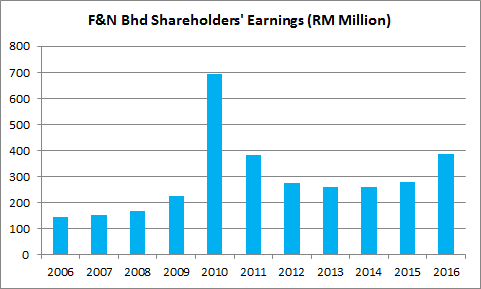 5. F&NHB has a five-year return on equity average of 16.62%. I used a five-year period as it is better to assess F&NHB’s ability to generate profits after the disposal of Malaya Glass Products Sdn Bhd and the cessation its Coca-Cola franchise rights in September 2011. Overall, it is still a healthy figure. 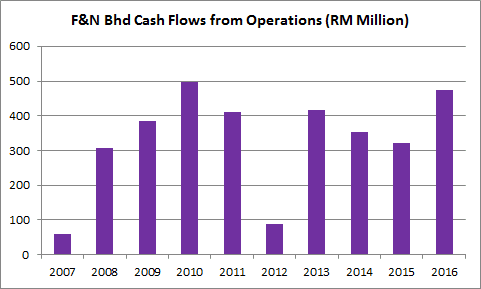 This has enabled the group to pay out RM2.37 billion in dividends to its shareholders during the period. F&NHB has maintained its dividend at RM0.55-0.60 per share over the last five years. As at 29 September 2017, F&NHB is trading at RM24.66 a share.

If F&NHB is able to maintain its dividend per share at RM0.575, its expected dividend yield is around 2.3%.

7. F&NHB has some key risks and the management has provided discussions on how to mitigate their impact on the business performance. They include:

8. Moving forward, F&NHB aims become the “No. 1 Total Beverage Company in Malaysia by 2020”. The management has revealed numerous projects to sustain future growth:

In summary, F&N Holdings Berhad has built a track record of increasing sales and profits and consistent dividend payouts to shareholders over the long term as it evolves into the leading total F&B organization in Southeast Asia.