In my previous article, I tapped on the advice of the wealthiest investment manager of the world, Warren Buffet, and wrote mainly on the point that volatility is not risk. I also added in some noted qualities that investors should have. Today I am going to build on the wisdom extracted from his 2014 Shareholder Report which would be valuable to intelligent master investors and novice investors alike.

After all, there is a difference between knowing and doing. From his practice, Warren Buffet and his long term investment partner, Charlie Munger, have given us powerful insights without trying to cover up for their mistakes made. This reflects a humility and confidence that is rarely seen, probably only by a guy who is rich and confident enough to do so. This is what makes it worth reading repeatedly and let me share some new insights for you today.

This may come as a surprise to you or some of you may already know but according to Buffett, business and investments are two sides of the same coin. By running a business, you will know what makes a good investment and by being a good investor you can also be a good businessman.

“I’ve mentioned in the past that my experience in business helps me as an investor and that my investment experience has made me a better businessman. Each pursuit teaches lessons that are applicable to the other. And some truths can only be fully learned through experience. In Fred Schwed’s wonderful book — Where Are the Customers’ Yachts? — a Peter Arno cartoon depicts a puzzled Adam looking at an eager Eve, while a caption says, ‘There are certain things that cannot be adequately explained to a virgin either by words or pictures.’ If you haven’t read Schwed’s book, buy a copy at our annual meeting. Its wisdom and humor are truly priceless.”

I purposely choose to quote this long passage because the example about Adam and Eve is a good analogy that there are only something that can be understood their experience and not words. Warren Buffett started his investment career as a manager of a failed textile manufacturer that lost out to China despite his expertise at streamlining operations. This is because China was simply too cheap then and the cost advantage was insurmountable. Nevertheless Warren Buffett learnt a thing or two and became a better investment manager. He is now applying it on two of his best investment managers, Todd Combs and Ted Weschler, so that they can become better by asking them to lead small businesses.

So if you are a businessman reading this article, try your hand at investments. Who knows, you might even outperform the best of the fund managers. If you are fund manager, you might take a leaf out of Buffett’s book and manage a real life business. Then you will be able to understand the motivations of businesses and how they wish to present their financial statements. You would be able to gain more insights from what is shown or said during company visits.

The other point which I would like to share is that Buffett is bullish on America. There are a lot of naysayers when the Credit Crunch hit in 2007 and how the US dollar will lose its status as the reserve currency. The worst of them predicted that the US was going into terminal decline but the fact is that the US is still a growth engine in the world. Let us hear from Warren Buffett himself below:

“Late in 2009, amidst the gloom of the Great Recession, we agreed to buy BNSF, the largest purchase in Berkshire’s history. At the time, I called the transaction an “all-in wager on the economic future of the United States. That kind of commitment is nothing new for us. We’ve been making similar wagers ever since Buffett Partnership Ltd. acquired control of Berkshire in 1965. For good reason, too: Charlie and I have always considered a “bet” on ever-rising U.S. prosperity to be very close to a sure thing.”

Warren Buffett bought a major railway operator in the depths of the crisis when the whole world was selling and there were people who thought that it was either crazy or too expensive. If you had listened to them then, you would have expected Berkshire to collapse today. This is the meaning of confidence, to ignore what critics say and insist on doing what is right.

We are our own master of our destiny and that includes our investment outcomes, so when we lose money in not insignificant amounts, who should we blame? The answer is given in quotes succinctly below by Buffett who quoted his teacher Ben Graham who in turn quoted Shakespeare and I am quoting all of them:

“Decades ago, Ben Graham pinpointed the blame for investment failure, using a quote from Shakespeare: ‘The fault, dear Brutus, is not in our stars, but in ourselves.’”

Since time immortal, the sages have warned us not to blame the whole world and to take personal responsibility when our investment decisions go wrong. Buffett went on to advise us to avoid active trading, paying high and unnecessary fees to investment managers, borrowing money to fund your investments and to diversify your investments as anything can happen in the market. This are pearls of wisdom to keep in mind.

I will now quote Warren Buffett’s long term partner and respected investor in his own right, Charlie Munger on focus:

“In particular, Buffett’s decision to limit his activities to a few kinds and to maximize his attention to them, and to keep doing so for 50 years, was a lollapalooza. Buffett succeeded for the same reason Roger Federer became good at tennis. Buffett was, in effect, using the winning method of the famous basketball coach, John Wooden, who won most regularly after he had learned to assign virtually all playing time to his seven best players. That way, opponents always faced his best players, instead of his second best. And, with the extra playing time, the best players improved more than was normal.”

The lesson here is that you can choose to invest in 100 stocks which you don’t know much of. Or you can invest in 5-10 stocks that you know extremely well and can monitor. If you really want to invest in 100 stocks, do it through an ETF and not individually because the ETF is picked based on an index that will do the proper screening and adjustment for you periodically. You might not expect it to grow as fast but your money is more secure than if you were to monitor 100 stocks yourself in the name of diversification. You only have one brain and 24 hours a day. In addition, you have other demands on your time as a parent, as a employee/employer, as a friend, as a child and so on. So be realistic and focus. It is better to know five stocks inside out then to know 100 stocks superficially if you want to make it big.

Lastly we shall take a look at how we should assemble a portfolio in the true sense of value investing. This list is not something that is compiled overnight and so your investment portfolio is something to be built patiently. 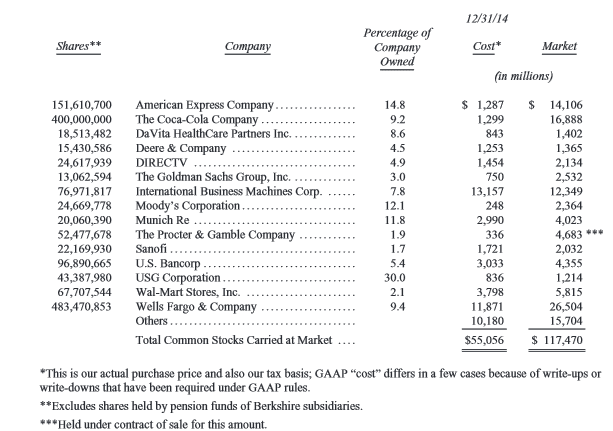 The table above shows us that for every $1 spent, the market is valuing it at $2.13. This is considering Berkshire’s size that it can’t chase after small deals and can’t enter the market without a significant impact on it. On a side note, all these companies are well-managed companies, shining examples of wonderful businesses being bought at fair prices.

Then again Warren Buffett also made mistakes. Compare the 2014 listing with the 2013 listing below and see what has changed. 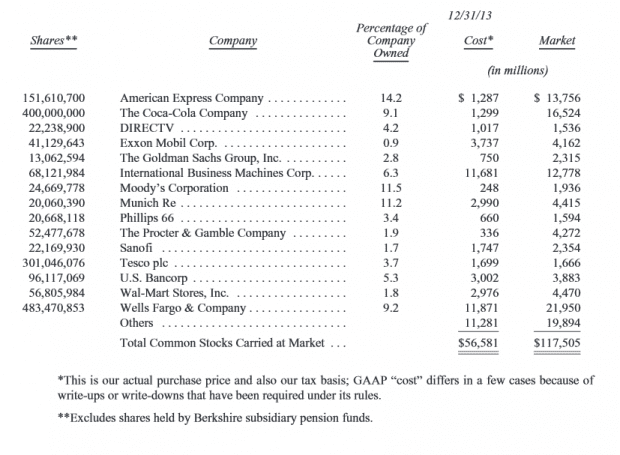 Not to keep you guessing, the missing piece is Tesco. Tesco is a major UK supermarket much like NTUC FairPrice or Cold Storage in Singapore. Tesco suffered from contracting margins as it became less competitive. Berkshire realized its mistake which by Buffet’s admission was late on hindsight. After holding it for two years, Berkshire finally exited its Tesco position entirely. After which, the entire Tesco’s management was sacked and replaced with new management.

The loss to Berkshire was $444 million or a fifth of a percent. So even the best investor makes mistakes and we don’t have to ashamed if our calls go wrong periodically. However we should cut them before it does an irreparable damage to our balance sheet.

I hope that this article has been helpful in guiding your investment decision process and to give you fresh insights along the way. Buffett has said that over the long term, it is dangerous to hold cash or currencies because they don’t keep up with inflation. Over the long term, only stocks will allow you to keep up your current standard of living especially in old age. However this is conditional on you being a good investor and this is what this article is all about in the first place. Good luck on your long investment journey ahead!