DBS Group is a leading financial services group in Asia, with over 280 branches across 18 markets. Headquartered and listed in Singapore, the bank has a growing presence in three key Asian markets: Greater China, Southeast Asia and South Asia. As of 31 December 2017, DBS has total assets of $518 billion. Recently, DBS has strived to position itself as the Digital Bank of Singapore – a play on its original name Development Bank of Singapore. 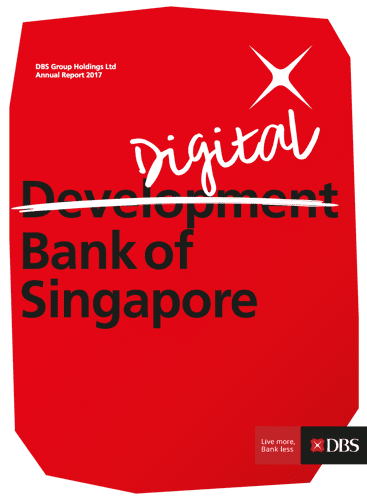 However, not only are banks getting smarter through digital transformation; its customers are also getting smarter too. They buy one lot of shares and wait eagerly each year to voice their grievances at the annual general meeting. This year at DBS’s 2018 AGM, I heard complaints from one shareholder about the bank donating money to ‘fake’ charities and another about having his credit limit reduced after being a customer for 30 years.

It was definitely an interesting and eye-opening experience. Sitting in the Marina Bay Sands Grand Ballroom, I got to hear from the management on what they have accomplished the past year and how they plan to future-proof the bank through technology.

So here are eight things that I learned from the 2018 DBS AGM:

1. Revenue increased 4% from $11.49 billion in 2016 to $11.92 billion in 2017. Net interest income rose by 7% to $7.79 billion. The increase was led by the growth in loans which more than offset a five-basis-point decline in net interest margin from 1.80% to 1.75% Non-interest income increased 12% to $2.62 billion primarily due to the double-digit gains in fee income from Wealth Management, Investment Banking, and Cards, which increased by 35%, 14%, and 12% respectively. Other non-interest income fell 18% to $1.51 billion due to weaker trading income and corporate customer treasury income. 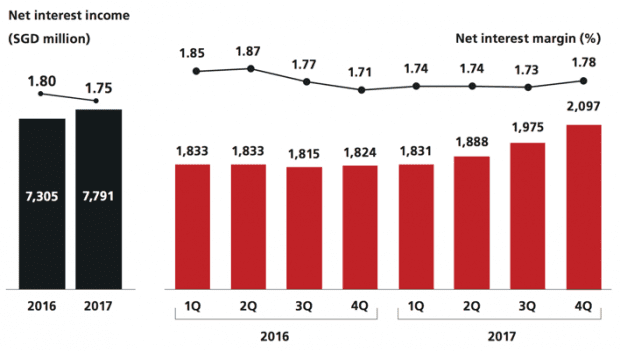 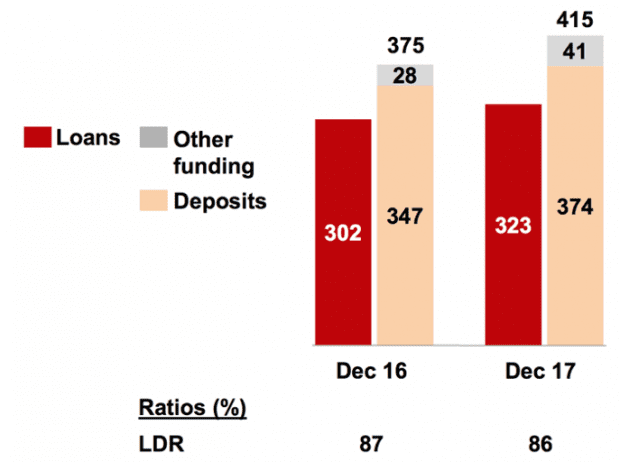 4. Non-performing loans (NPL) ratio increased from 1.4% in 2016 to 1.7% in 2017. DBS’s total net allowances increased 8% to $1.54 billion due to the accelerated recognition of residual exposure to the weak oil and gas support service industry.

5. A shareholder asked why was DBS’s return-on-equity (ROE) of 9.2% was lower than its competitors (UOB is at 10.2% and OCBC at 11.2%), and lower than banks in the U.S. and Australia. CEO Piyush Gupta said that an ROE of 13% is a doable target. US and Australian banks are able to generate higher ROEs because they earn a higher net interest margin of over 3% compared to Singapore’s at 1.7-1.8%. In addition, local banks have higher capital requirements and lower loan-to-deposit ratios compared to foreign banks.

6. Another shareholder asked, from an macroeconomic standpoint, how a rate hike in the U.S. would affect the Singapore Interbank Offered Rate (SIBOR). The CEO shared that if you observe the last 10 to 15 years, a 1% increase in the U.S. interest rate will see the SIBOR rise by 0.4-0.7%. DBS is a direct beneficiary of a rate hike — for every five basis-point rise in the SIBOR, the bank will generate $40 million more in revenue.

7. A shareholder who attended UOB’s AGM this year mentioned that the bank is spending $1.2 billion on information technology. He wanted to know how much DBS is spending on IT and a breakdown of how the bank allocates its investments and their returns on investment.  The CEO said DBS spent slightly less than its competitor last year — between $1.0-$1.1 billion. He emphasized that the difference is that DBS has been doing this for a very long time, close to 7-8 years. In the beginning, 75% was spent on building the IT infrastructure and 25% was spent on digital transformation. Last year, it was 50-50. He also stated that DBS’s share of spending on IT is relatively higher than most companies out there.

8. Another shareholder wanted to know more about the threat of fintech to DBS. The CEO said that 99% of fintech companies are small and do not pose a threat to DBS. They have a hard time finding customers and most of them end up partnering with a bank. For the top 1% of fintech players, he admitted that it would be challenging to compete against companies such as Alibaba, Google, Tencent, and Amazon in their domestic markets. However, if they were go to other parts of the world like Southeast Asia, he believes that DBS is well equipped to compete with them.