Mapletree Commercial Trust (MCT) was listed on the SGX on 27 April 2011. It invests in a portfolio of retail and office properties in Singapore worth S$6.35 billion as of 31 January 2018. It’s most well-known property is VivoCity, the largest shopping mall in Singapore. In this article, I’ll discuss the contributions of each property to MCT from its IPO to now, the potential risks to MCT and an update on the REIT’s plans in the immediate future.

Here are 12 things you need to know about Mapletree Commercial Trust before you invest.

Mapletree Commercial Trust listed with an initial portfolio of three properties measuring worth S$2.8 billion. They include:

1. VivoCity is MCT’s trophy asset and remains the largest shopping mall in Singapore. The mall serves as the sole gateway for visitors taking the MRT and monorail from mainland Singapore to Sentosa. In 2017, VivoCity recorded 55.8 million in shopper traffic, up from 51.6 million in 2012. This is due to higher visitations to Resorts World Sentosa and the Universal Studios Singapore, both of which are located on Sentosa. As a result, VivoCity has contributed consistent growth in gross revenue from S$135.1 million in 2012 to S$200.9 million in 2017. 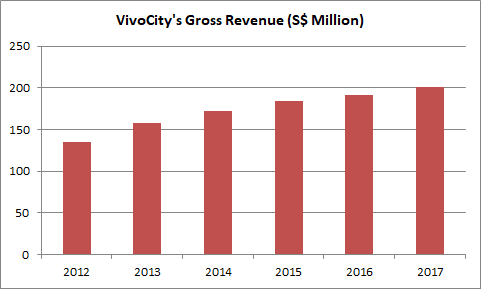 2. PSA Building is an integrated development comprising a 40-storey office building and a three-storey retail centre located in the Alexandra precinct. In 2017, it recorded a 98.3% occupancy rate with major tenants including PSA Corporation, Casino Regulatory Authority, Bank of Singapore and Mapletree Investments. Since its listing in 2012 to 2014, MCT has substantially increased the number of tenants in PSA Building. This lifted its gross revenue from S$27.8 million in 2012 to S$46.1 million in 2014. Since then, PSA Building has kept its number of tenants between 110 and 120, thus maintaining its gross revenue at S$45-50 million a year from 2014 to 2017. 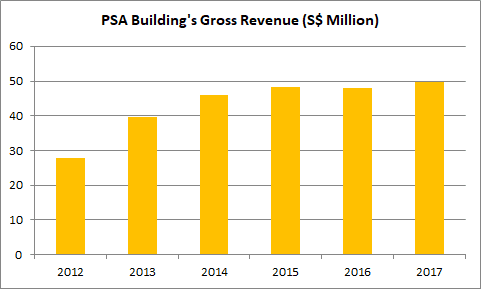 3. Bank of America Merrill Lynch HarbourFront is a six-storey office building occupied by Merrill Lynch Global Services. Since 2013, it has reported S$15-20 million in gross revenue a year, thus making it the smallest contributor of revenues to MCT. 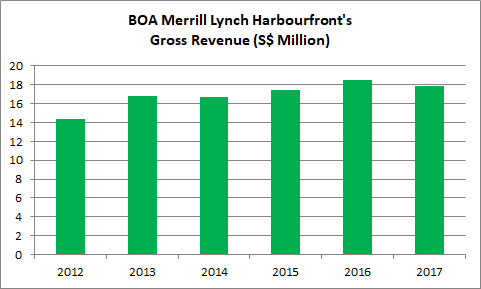 Since its listing, MCT has made two major acquisitions:

4. On 4 February 2013, MCT acquired Mapletree Anson for S$680 million. It is a 19-storey Grade-A office building located in the Singapore’s central business district. In 2017, it is fully-occupied with 19 tenants including J. Aron & Company (Singapore), Sumitomo Corporation Asia, and Yahoo! Southeast Asia. Since 2014, the property generates S$30-35 million a year in gross revenue. 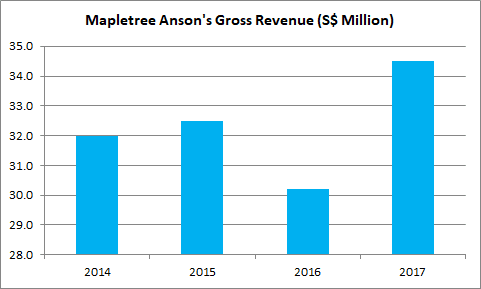 5. In August 2016, MCT acquired Mapletree Business City 1 (MBC 1) for S$1.78 billion. It is an integrated development which comprises one 18-storey office tower and three business park blocks located in the Alexandra precinct. In 2017, it recorded a 99.0% occupancy rate with key tenants including Google Asia Pacific, Hongkong and Shanghai Banking Corporation, Samsung Asia, SAP Asia and Government Technology Agency of Singapore. Since it acquisition, MBC 1 has made S$137.5 million in gross revenue, thus, making it the second largest contributor of revenue to MCT. 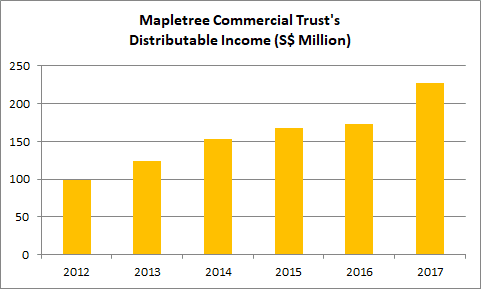 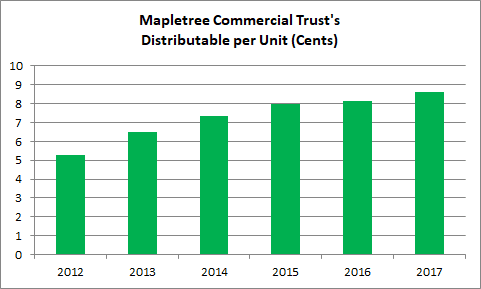 8. In April 2016, MCT completed the restructuring of its lease with Bank of America Merrill Lynch at Merrill Lynch Harbourfront ahead of its original expiry in November 2017. The lease has been renewed for a further term of six years beginning 1 January 2017. However, it is only for the first five levels of the six-storey office building, causing the occupancy rate to drop to 79.2% as at 31 March 2017. The drop was temporary as MCT has managed to secure a new tenant to occupy parts of the sixth floor, bringing up its occupancy rate to a 91.6% as at 31 December 2017.

9. As at 31 December 2017, MCT’s portfolio weighted lease expiry is 2.7 years. As a percentage of gross revenue, 55% of leases will expire only in 2021 and beyond. Its relatively long office/business park WALE and high retail occupancy rates adds to MCT’s income visibility. 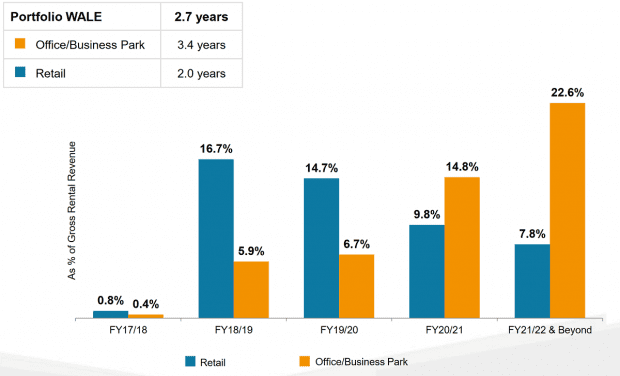 10. In Q1 2018, MCT announced its plan to add a 3,000-square metre public library on Level 3 of VivoCity. The management believes the library will enhance the attractiveness of VivoCity as a destination mall. In addition, MCT has embarked on further asset enhancement initiatives on VivoCity involving the extension of Basement 1 which will add another 24,000 square feet of retail space. MCT targets to complete the renovations by Q3 2019.

11. MCT is sponsored by Mapletree Investments, a leading real estate development, investment and capital management company in Singapore. As at 31 May 2017, Mapletree Investments is the largest shareholder of MCT with a 33.82% shareholding and has built an impressive track record of managing three other SGX-listed REITs — Mapletree Logistics Trust, Mapletree Industrial Trust, and Mapletree Greater China Commercial Trust — and six private equity real estate funds. Currently, MCT has rights of first refusal (ROFR) to acquire eight more properties from its sponsor, potentially adding over three million square feet in total net lettable area to its portfolio.

12. MCT is highly reliant on VivoCity and Mapletree Business Centre 1 for a substantial portion of its income. In Q3 2018, the two properties accounted for 76.8% of MCT’s gross revenue. Thus, MCT’s performance would be impacted if these two properties were negatively affected.

Since its listing in 2011, Mapletree Commercial Trust has built a track record of delivering growth in gross revenue and distributable income to unitholders. With a solid revenue profile and an extensive pipeline of potential acquisitions, MCT is currently in a firm position to grow its portfolio to increase and diversify its future income.

Finally, just a quick reminder: 2018 applications to join Dividend Machines close Sunday, 18 March 2018, at 23:59 hours. If you’re looking for a way to learn how to invest in dividend stocks and REITs and build multiple streams of passive dividend income, then we highly recommend you check out Dividend Machines before applications close!