In the ‘Investment Legend’ series with The Fifth Person, I have covered famous investors like Warren Buffet of Berkshire Hathaway, Ray Dalio of Bridgewater Associates and David Einhorn of Greenlight Capital. All of them are based in the United States but today I would like to introduce to you a local Singaporean legend – Danny Yong, founder and chief investment officer of Dymon Asia.

Dymon Asia put Singapore on the investment world map and is the first notable, large-scale hedge fund from Singapore with US$4.5 billion in assets under management (AUM).

So what is so outstanding about Dymon Asia? Why does it command global respect and recognition from professional in the ultra-competitive hedge fund industry?

Well, first and foremost, Dymon Asia was No. 10 globally among the 100 top-performing large hedge funds (above US$1 billion in AUM) in 2014: 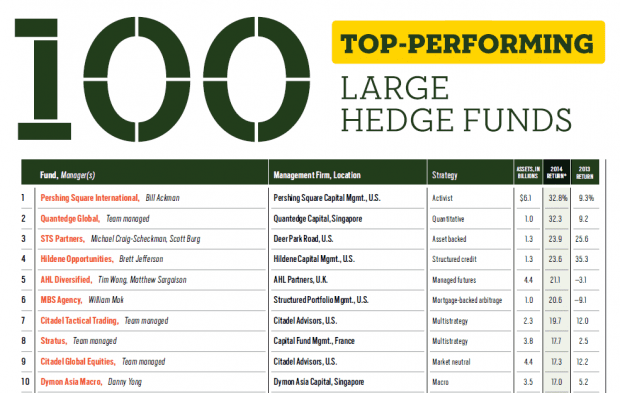 (On a side note, Quantedge is managed by a team of 15 math wizards with degrees from Harvard, Wharton, Oxford, MIT, and Berkeley. They have a passion for actuarial science – the discipline that applies mathematical and statistical methods to assess risk in insurance, finance and other industries and professions.)

In addition to being a global top 10 performing large hedge fund, Dymon Asia is the only Singapore-based macro fund to be recognized by HSBC: 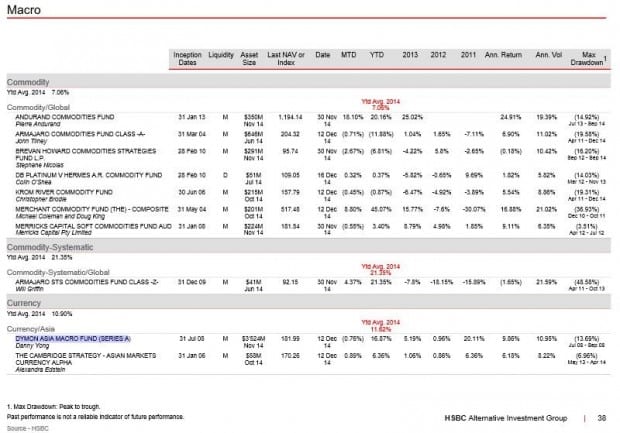 Dymon Asia did especially well in 2011 returning 20.11% when other notable macro funds on the list were returning between -30.07% to 9.69%. In fact, Dymon’s only calendar year loss was in 2008 when it was founded just before the global financial crises.

Besides accolades from Bloomberg and HSBC, we have to note that the hedge fund industry is very competitive. Dymon Asia is still going strong in its 8th year of existence – a milestone less than 8% of Asian hedge funds actually reach. In other words, more than nine out of ten hedge funds which started the race in 2008 with Dymon Asia are defunct now due to variety of reasons such as underperformance, liquidity and regulatory issues according to Cambridge Associates.

Lastly, it should be noted that Temasek Holdings invested $500 million in Dymon Asia in May 2014. Temasek Holdings would not invest with Yong just because Dymon Asia is a Singapore success story. Intensive due diligence would have been undertaken before a half-billion dollar decision is made. After all, Singaporeans have high expectations of our sovereign wealth fund.

When news of Temasek performing well is released, it hardly makes a wave. However when losses are reported, there is a huge public backlash from the populace. Temasek Holding’s CEO, Ho Ching, stepped down in February 2009 when the fund lost $2 billion out of its $5 billion investment in Merrill Lynch during the peak of the financial crisis. This happened six long years ago but I suspect most people can still recall the Merrill Lynch fiasco.

Temasek made record net profits of $14.5 billion for the financial year of 2014 and total shareholder return was 19.2% — the highest in the last five years. This was announced recently in July but can you remember it?

Success is taken for granted but failure results in massive public outcry. Temasek executives have to screen their investments very carefully or risk their careers in the global investment industry. Hence, this $500 million investment is a strong endorsement of the capabilities of Danny Yong and Dymon Asia.

Dymon Asia’s achievements alone would more than justify Danny Yong inclusion as a local investment legend. However, Yong didn’t come from the most advantageous of family backgrounds and his is a classic rags-to-riches story. Let us trace Danny Yong’s journey to see how he ended up where he is today.

Yong’s father died of cancer when he was 10 years old. His mom motivated him to work hard so that people will not look down on him. As seen from this NTU interview in February 2013, growing up in a single family motivated him to keep pushing his boundaries. He would wake up at 5 a.m. every morning to run and his discipline allowed him to break into the national badminton team at the age of 17. Yong was at Catholic Junior College then and he had to juggle between his ‘A’ Levels studies and the rigours of national team badminton.

In order to save time, Yong would sleep at the badminton courts of the Singapore Badminton Association just so he could save the two-hour commute to study for his exams and train for badminton. This sacrifice is nothing to Yong:

“I don’t think sleeping at the courts was very extreme. I had school work to get done, and I had to train to stay on top of my chosen sport – I just did what I had to do. To me, if you want to do something, you do it properly.”

This drive opened the path to Nanyang Business School. In that competitive environment, he graduated with a first-class honours degree in banking and finance in 1997.

However, this was almost not enough for him to be selected by JP Morgan as an Asian currency derivatives trader. He had to compete with 1,000 other applicants for the job and his application was initially placed in the ‘reject’ pile. Luckily for Yong, a trader at JP Morgan was thumbing through the reject pile and recognised Yong’s photo and recused his application from the reject list. He eventually went on to secure the job. To this day, Yong admits there that may not be a Dymon Asia if not for that one small action that changed everything.

After a three-year stint with JP Morgan, Yong joined Goldman Sachs in February 2000 and would end up as the head of trading for South Asia derivatives. He then joined Citadel in November 2005. Two years later, he became chief investment officer and managing partner at Abax Global Capital which is partly owned by Morgan Stanley.

In July 2008, Yong founded Dymon Asia with US$100 million in funding from billionaire trader Paul Tudor Jones’s Tudor Investment Corp. A few months later, Lehman Brothers collapsed in September 2008 which sent the global economy into a tailspin. Yong would eventually part ways with Abax in 2009 to focus on Dymon Asia.

It is clear that Yong has gotten to where he is today based on tenacity, hard work, and passion. Yong came from a single-parent family and instead of holding him back, he used it to spur him to greater heights. While others may have beaten at the cards life deals them, he was determined to prove that he was no less able than anyone just because he lost his dad at a young age.

He carried this tenacity into the other areas of his life and applied the same resolve and hard work in his studies and badminton. This enabled him to earn a first class honours degree which opened doors into the financial industry for him. Even today, as the successful founder and CIO of a US$4.5 billion hedge fund, Yong still brings the same work ethic and high standards into the office every day.

Instead of sleeping overnight at the badminton courts, he has graduated to sleeping in his office at times just so he can monitor global markets across different time zones. Yong continues to work so hard now even though Dymon Asia is now well established because he loves what he does and his passion for investing:

“This is what I love doing. It’s what I enjoy. Look at the guys from the U.S., like Soros in his 80s and Louis Bacon in his 60s, they’re all still going strong. To do well in investing, one has to be 100 per cent committed. The day one feels like slowing down, it is better to just retire. In this business, you are either 100 per cent engaged, or not at all. There is no in-between. I am fortunate that I have a passion for investing. If you’re in this only for the money, you will burn out quickly and end up quitting altogether.” – Danny Yong, NBS Alumni

His hard work, tenacity, and passion were all evident when Yong first founded Dymon Asia on the cusp of the global financial crisis. Immediately after its inception, the fund posted its biggest loss of -13.69% from July to September 2008 as the crisis started to accelerate. That meant that Dymon Asia lost US$15 million of its investors’ money in the first five months of its launch. But Yong responded to the setback the way he knows best and powered on, taking Dymon Asia from strength to strength to where it is today.

It is not every day that someone becomes the founder of a multibillion-dollar hedge fund. It requires a certain set of skills, talent, and drive to reach the top like Danny Yong. But even he admits, a little bit of luck came his way as well when a JP Morgan trader rescued his application and give him the break he needed in the financial industry.

But even then, if Dymon Asia never happened, one might still think that Danny Yong would still be a success somewhere else because of his tenacity and drive that’s allowed to deal with adversity that has come his way on his journey to reaching the top.