Axis REIT is the first Islamic business space and industrial REIT to be listed on Bursa Malaysia. As at 30 June 2018, Axis REIT has a portfolio of 42 properties worth RM2.66 billion. In this article, I’ll cover Axis REIT’s results for the last 10 years and discuss its plans for growth in the near-future.

Here are 12 things to know about Axis REIT before you invest: 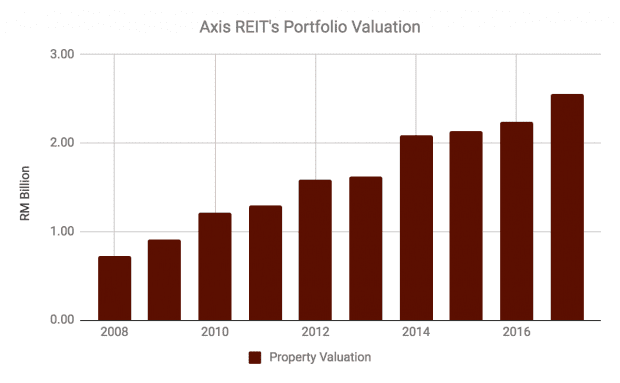 2. Group revenues grew from RM63.3 million in 2008 to RM167.8 million in 2017. During the period, Axis REIT grew its distributable income from RM38.97 million to RM92.67 million. The growth in both revenue and income is in line with Axis REIT’s efforts in expanding its portfolio. 5. In 2016, Axis REIT embarked on its first development project where it undertook a build-to-lease project of Axis Mega Distribution Centre in Selangor. In January 2018, it completed Phase 1 of the project which consists of a 515,000-square feet warehouse. It is now being leased to Nestle Products Sdn Bhd for a 10-year term with an initial annual lease of RM19.2 million with agreed rental step-ups once every three years. Upon expiry, Nestle Products Sdn Bhd has an option to renew the lease for two terms of three years each.

6. On 5 December 2017, Axis REIT completed the RM155-million acquisition of Wasco Facility in Gebeng, Pahang which comprises of two parcels of land: Land 1 and Land 2. Land 1 consists of a pipe-coating factory and a stockyard. Land 2 is completely used as a stockyard. The property is being leased back to its vendor, Wasco Coatings Malaysia Sdn Bhd under a 15-year fixed lease agreement with rental rates as follows:

7. On 4 June 2018, Axis REIT completed its acquisition of Axis Shah Alam Distribution Centre 4 in Selangor which comprises four warehouse blocks, a double-storey detached office building, a canteen, and two guardhouses. This property is now leased to Teraju Sinar Sdn Bhd for a period of six years with rental rates as follows:

8. On 7 June 2018, Axis REIT entered into a sales & purchase agreement to acquire two factories located in Kawasan Perindustrian i-Park at Indahpura, Johor for RM38.7 million. Factory 1 was purchased for RM31.5 million and is now leased to Beyonics Precision Malaysia Sdn Bhd for 10 years. Factory 2 was acquired for RM7.2 million and now is leased to Oerlikon Balzers Coating Malaysia Sdn Bhd for seven years. Their rental rates are as follows:

9. On 8 August 2018, Axis REIT entered into sales & purchase agreement to acquire an industrial facility located at Senawang, Negeri Sembilan for a total of RM18.5 million. The property is now being leased to Nippon Wiper Blade (M) Sdn Bhd for a period of 10 years from 1 July 2016 to 30 June 2026. Its rental rates are as follows:

10. In November 2017, Axis REIT took on its second development project — Axis Aerotech Centre@ Subang Aerotech Park — where it agreed to build an aerospace industrial manufacturing facility for Upeca Aerotech Sdn Bhd (Upeca). The project is estimated to cost RM74.16 million (inclusive of the cost of land). Axis REIT has agreed to hand over the property to Upeca on 15 December 2018 where it will be leased for a period of 20 years with options to renew for two terms of six years each. The initial rent is set at RM5.58 million annually for the first three years. 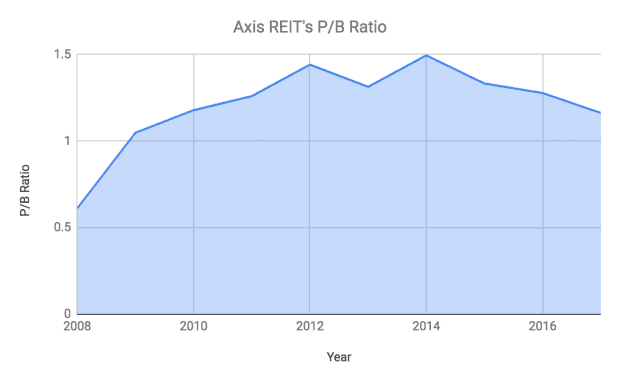 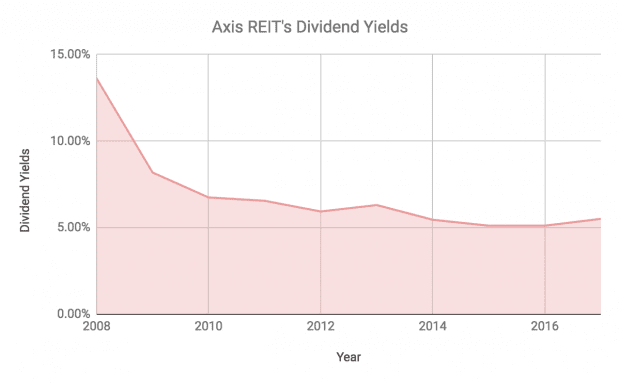 Axis REIT has delivered growth in revenue, distributable income, and net asset value to its unitholders over the last 10 years thus far. However, based on a shorter view, Axis REIT’s distributable income has been stagnant at RM91-92 million a year from 2013 to 2017. DPU has maintained at 8.00-8.50 sen over the last three years. Due to its stagnant DPU, Axis REIT’s stock price has been hovering around RM1.50 to RM1.80 since 2014. 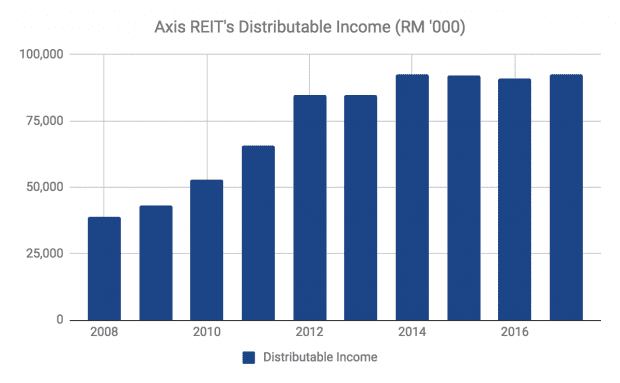 Axis REIT is working to expand its portfolio with acquisition of new properties and the development of Axis Aerotech Centre. With stable long- term fixed lease structures, they should add to Axis REIT’s stability and distributable income growth in the future.

Presently, Axis REIT’s net dividend yield (based on a share price of RM1.51) is 4.8%. It is currently lower than yields offered by other logistics/industrial REITs listed on the SGX where their yields range between 6% to 8% a year. Here are a few of which I’ve covered previously:

Thus, I believe it is prudent for anyone to compare Axis REIT with similar REITs before considering it for your portfolio.