Jardine Strategic Holdings Limited (SGX: J37) is a Singapore-listed conglomerate with multiple business interests located across the Asia-Pacific. Presently, it owns and derives income from the following public-listed subsidiaries:

Jardine Strategic is among the top 30 constituents of the Straits Times Index (STI) and is worth around US$24.6 billion in market capitalization as I write. In this article, I’ll bring a detailed account of the performances of each of its main subsidiaries, discuss the challenges it faces, and provide an update on its recent developments.

As such, here are 11 things you need to know about Jardine Strategic before you invest: 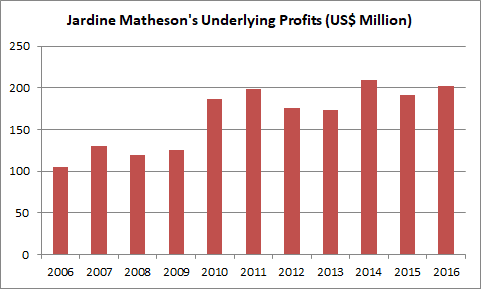 2. Jardine Cycle & Carriage is a conglomerate which owns a portfolio of automobile companies across Southeast Asia. Currently, it owns 50.1% of Indonesian-listed Astra International, an established conglomerate in Indonesia. Jardine C&C also operates a network of automotive dealerships in Vietnam, Malaysia, Singapore and Indonesia. In 2015, Jardine Cycle & Carriage increased its stake in Truong Hai Auto Corporation from 19% to 22%, and acquired a 25% stake in Thai-listed Siam City Cement for US$615 million. The inclusion of these two associate companies have resulted in substantial growth in underlying profits to Jardine Strategic in 2015 and 2016. 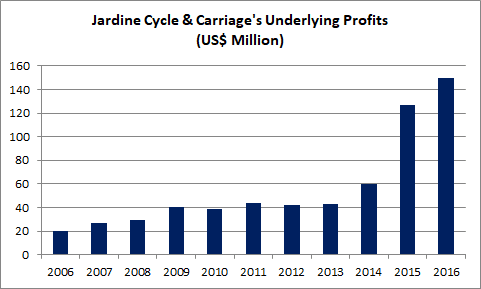 3. Hongkong Land is a leading property development and investment group with strategic assets located mainly in China, Hong Kong, and Singapore. Hongkong Land has seen a gradual increase in rental income from its investment properties and has substantially grown its sales from development projects in Chongqing, China. As a result, Jardine Strategic has received higher underlying profits from Hongkong Land, up from US$107 million in 2006 to US$424 million in 2016. 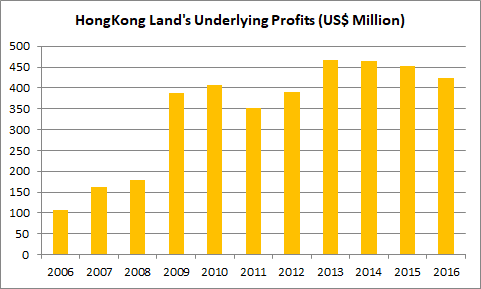 4. Dairy Farm International is a leading retail conglomerate with a brand portfolio incluing Wellcome, Giant, Cold Storage, 7-Eleven, Guardian, Mannings, Rose Pharmacy, and IKEA. It also owns 50% of Maxim’s, a leading caterer and an operator of a network of restaurants, cafes, and bakeries in Hong Kong. Dairy Farm remains one of Jardine Strategic’s main income contributors as it has contributed US$300-400 million in underlying profits annually since 2010. 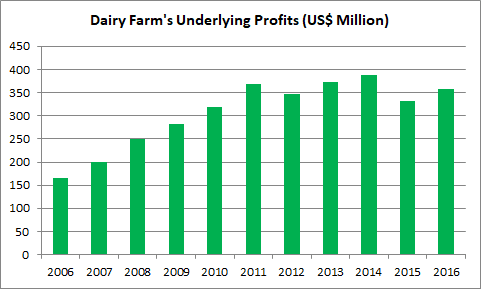 5. Mandarin Oriental International is a multinational hotel investment and management group. It operates 30 hotels and eight residences in 20 countries. Despite its size of operations, Mandarin Oriental remains a smaller income contributor to Jardine Strategic. It has brought, on average, US$60 million in underlying profits annually to Jardine Strategic over the last five years. 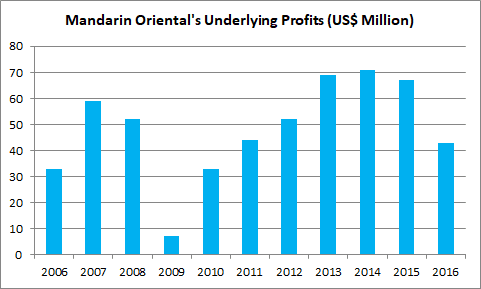 6. Overall, Jardine Strategic has achieved a CAGR of 10.3% in group revenues over the last 10 years, up from US$27.1 billion in 2006 to US$72.4 billion in 2016. Group revenue is inclusive of 100% of sales recorded by Jardine Matheson, and all associates and joint ventures of Jardine Strategic. The sales growth is due to growth in revenues from Hongkong Land, Dairy Farm, and Jardine Cycle & Carriage during the period. 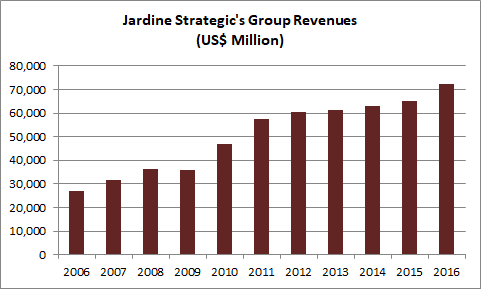 7. Jardine Strategic increased its underlying profits from US$526 million in 2006 to US$1.62 billion in 2013, before recording a string of declines to US$1.44 billion in 2016. The profit decline is mainly due to lower profits recorded by Astra International since 2013. 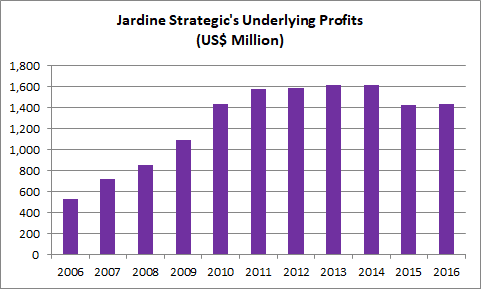 8. From 2007 to 2016, Jardine Strategic generated US$21.4 billion in cash flows from operations. It received US$4.9 billion in dividends from its investments in associate and joint venture companies and another US$1.2 billion in interest income. It has also raised US$3.8 billion in net long-term debt over the same period. Out of which, Jardine Strategic has spent:

Overall, Jardine Strategic has increased its cash reserves from US$1.3 billion in 2006 to US$5.24 billion in July 2017. Its debt-to-equity ratio is 0.15. Jardine Strategic has used a combination of positive cash flows from operations, dividend and interest income, and long-term debt to expand its business empire and reward its shareholders with dividends. 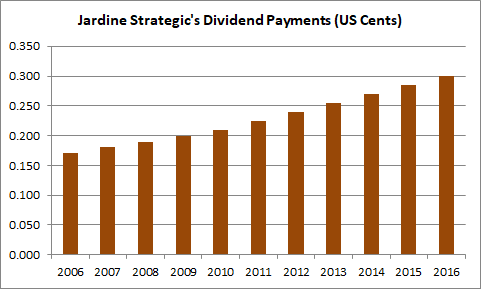 11. In 2017, Jardine Strategic has continued to enlarge its conglomerate through multiple strategic acquisitions made by its individual subsidiaries. Its recent developments include:

Over the last 10 years, Jardine Strategic has grown from strength to strength through organic growth and strategic acquisitions of market leaders across the Asia-Pacific. This has contributed to growth in group revenues and dividend payments to shareholders. Moving forward, it is vital for Jardine Strategic to maintain a healthy balance sheet as it continues to build its business empire and ensure its dominance in its industries in the years ahead.